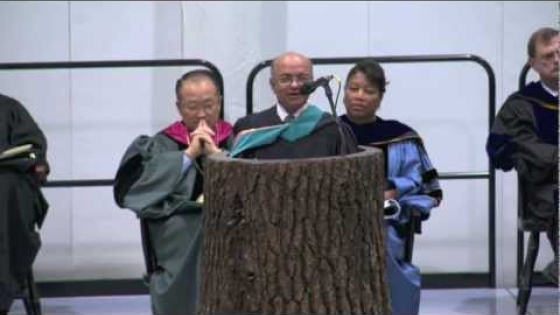 Thank you, Dean Johnson, for that very generous introduction.

President Kim, distinguished members of the faculty and staff, and dear students of the Class of 2015:

I first landed on this beautiful campus exactly 43 years ago, in September of 1968.

Coming from a small village in the mountains of Nepal—where there was no road, no electricity, no telephone, no school, no health center, not even a post office—everything in Hanover looked big and beautiful to me. So I was surprised when the faculty and staff and students continuously referred to Dartmouth as a small college, in a small town, in a remote area.

You know, as they say, what you see depends on where you stand.

My village was five days’ walk from the nearest bus stop—and in Nepal it was not considered a remote area. In those days in Nepal, to be classified as a remote, it had to be at least seven days’ walk.

Dartmouth was only 15 minutes from Lebanon airport and two hours from Boston. To call it remote seemed a little excessive to me.

Now, the Class of 2015, I am sure many of you also got admission, besides Dartmouth, to some other bigger universities in this country. But let me assure you, you made the right choice to come to this small college. Dartmouth has always been one of the finest colleges in this country and, indeed, in the whole world. Its relative smallness, in fact, hides its extraordinary greatness. As they say, most good things in life come in small packages. So does Dartmouth—smallest among Ivy League colleges, but renowned for its high quality education.

Given my fascination with things and people small and beautiful, it was no surprise that my Dartmouth education eventually led me to work for the world’s smallest and most precious human beings—the children of the world—through UNICEF. My Dartmouth education and student activism here, including the foreign languages I learned here and the courses I took on international relations, were an excellent preparation for my work with UNICEF. I was also lucky to have had the opportunity to work with a visionary leader named Jim Grant, who was the head of UNICEF in the 1980s and 1990s.

Bill Gates, who has done so much for global health, also had not heard of Jim Grant until last year. When he found out, he was so amazed that he profiled Jim Grant in his annual report this year, which you can check on his website.

In the 1970s, almost 20 million children below the age of 5 died every year in the world. That is more than 50,000 children dying every day. Less than 20 percent of the developing world’s children were immunized with cheap, life-saving vaccines which were routinely given to children in America and Europe.

Finding this situation totally unacceptable, UNICEF led a global movement for universal immunization of children and other child survival interventions. Within a decade we were able to raise child immunization levels in developing countries from 20 percent to 80 percent, and infant and child mortality rates were reduced by nearly one-third, or 6 million fewer child deaths every year.

How did we do that?

In most developing countries, the ministries of health and their hospital networks have limited outreach, modest budgets and very little political clout. So we reached out to where political power and budgetary authority lies—to presidents, prime ministers, kings, governors, and mayors. We made the case that it would help them politically to immunize all children, which could be done with very modest financial resources. And to motivate these leaders, we unleashed a massive social mobilization campaign. Remember, that was long before Facebook and Twitter and the Internet existed.

We involved the media, religious organizations, and famous celebrities like film stars Audrey Hepburn, Peter Ustinov, the “James Bond” Roger Moore, musicians, and sports personalities. We even managed to temporarily stop wars and organize “days of tranquility” to immunize children, such as in El Salvador.

Buoyed by the success of the child survival campaign, we managed to get a Convention on the Rights of the Child which is a kind of global Bill of Rights of children adopted by the United Nations. We even managed to convene the world’s first-ever and the largest global summit—the World Summit for Children—in 1990, which adopted many ambitious goals for children, which have today evolved into the Millennium Development Goals.

I feel lucky and proud to have been a key member of the UNICEF leadership team that helped put child survival, development, and protection of children high on the world’s political and development agenda.

Now, coming back to Dartmouth, it was during my work with UNICEF that I first met a Dr. Jim Kim—and began to admire him immensely. Dr. Kim was then a senior advisor to a small man in a big position with a great organization and a great mission—the late J.W. Lee—the head of the World Health Organization. Dr. Lee was a close friend of mine and of UNICEF, and we both considered Jim Grant as our common mentor. It is a true delight for me to see Jim Kim as president of Dartmouth today. Very few of America’s great universities can boast having a president with the stature of a global health leader.

Little Dartmouth is lucky—and so are you, the Class of 2015. I urge you all to take full advantage of the boundless opportunities that this small college with a great president and a glorious history has to offer you. Dartmouth has an amazing foreign language and study abroad program—better than any other university I know. Take advantage of it, and transform yourselves into true citizens of the world.

My own greatest satisfaction in life has been that Dartmouth education helped me not just to become a successful professional, but also to help our fellow human beings—particularly the most vulnerable women and children of the world.

You know, among the 7 billion people of the world today, those of us who get to study at a college like Dartmouth are a very privileged minority. Please use this opportunity not just to make yourself personally and professionally successful, but also to help those millions of fellow human beings who never get an opportunity even to finish primary school or secondary school, not to speak of attending a college like Dartmouth.

The 12th president of Dartmouth, John Sloan Dickey, used to say very memorably, “the world’s troubles are your troubles.”  By coincidence, the year when you graduate, 2015, is a milestone for achieving the Millennium Development Goals, which were devised by the United Nations to tackle some of the world’s greatest troubles—of poverty, illiteracy, ill health, and inequity.

Class of 2015, I urge you to prepare yourself to help tackle such troubles and say, “Here we come, bringing Dartmouth’s solutions to the world’s troubles!”

Thank you very much.

Date
9/17/2014
Body
Dartmouth Now takes note when faculty and other members of the community weigh in on issues of the day. Here is today’s “Quoted”:“Asking...
Articles