The Cyborg in Us All (The New York Times)

“For years, computers have been creeping ever nearer to our neurons,” The New York Times says in a story surveying the state of the field in computerized implants. 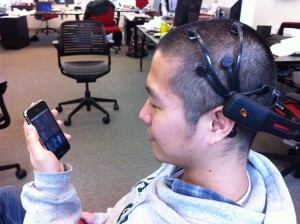 “Thousands of people have become cyborgs, of a sort, for medical reasons: cochlear implants augment hearing and deep-brain stimulators treat Parkinson’s. But within the next decade, we are likely to see a new kind of implant, designed for healthy people who want to merge with machines.”

The piece wraps up with a visit to Dartmouth to cover the neural phone, which is being developed by a team in the Department of Computer Science led by Andrew Campbell and including Tanzeem Choudhury and Rajeev Raizada. The device consists of an iPhone connected to an EEG (electroencephalography) headset. Matt Mukerjee ’10 provided a demonstration that greatly impressed the reporter.

Read the full story, published by The New York Times Magazine on 09/18/11.