The sun shone brightly in a cloudless sky early Friday morning September 2, as a dozen Dartmouth College staff members waited outdoors, prepared for a day of work wearing jeans, t-shirts, and sturdy shoes. They were heading to South Royalton, Vt., where four more Dartmouth employees would meet them to help with cleanup after the blow Hurricane Irene dealt New England on August 28. 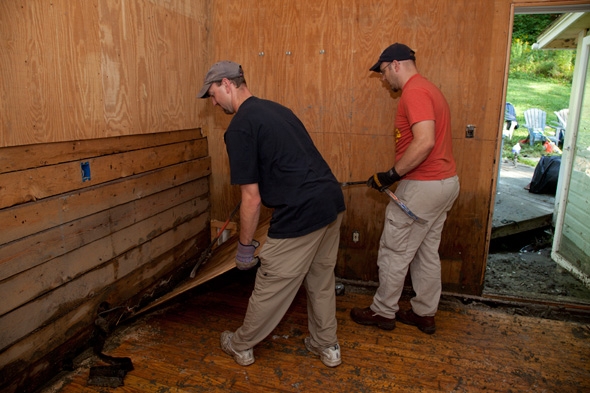 Dartmouth had battened down the hatches in preparation for the hurricane, and while the campus was spared serious damage, many nearby communities were not as fortunate. Rivers and streams overflowed their banks, washing away bridges, roads, and in some cases, houses.

President Kim acknowledged the effects on the storm in a letter to the Dartmouth community. “For many of our employees, friends, and neighbors, the powerful images seen on national newscasts and in online reports are far from abstract. Homes and businesses have been damaged, and thousands of people remain without power or road access,” he wrote.

The Dartmouth community has responded with concern and generosity. “We have had a carload of supplies donated by people on campus going to the Upper Valley Haven [homeless shelter in White River Junction, Vt.] every night,” says Tucker Foundation Director of Service of Educational Programs Helen Damon-Moore. “Those spared by this storm are eager to reach out, and our job is to connect those who can help with those who need it.”

The Tucker Foundation is also organizing work crews like the one headed to South Royalton. The College will allow each employee one day of paid leave to volunteer with hurricane-related projects.

Tracy Dustin-Eichler, program officer for local service for the Tucker Foundation, is leading the effort to connect employees with the community. “There has been an outpouring of energy from across Dartmouth to help with relief efforts,” Dustin-Eichler says.

Melanie Elliott, compensation coordinator in Human Resources, volunteered for a work crew heading for South Royalton, Vt. “I didn’t get hit, but I know people who did, and I want to help,” she says. “I grew up in New Hampshire and it’s hard for me to see, especially the covered bridges, and people who lost homes and property.”

For those who are on campus, the Tucker Foundation is sponsoring a service of reading and reflection in Rollins Chapel from noon to 1 p.m. on Friday, September 2, to honor lives lost to Irene and contemplate the road ahead for damage relief and rebuilding.