Kul Gautam ’72 grew up in a small village in the mountains of Nepal. One in four children died before reaching age five. There was no electricity or telephone service, no school or organized health care, no running water. From those humble beginnings emerged the man who would become assistant secretary-general of the United Nations and deputy executive director of UNICEF and the highest-ranking Nepali in the U.N. system. 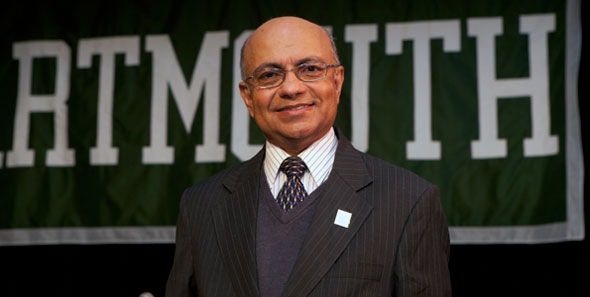 Gautam’s journey—and the large role Dartmouth played in his formative years—will be the subject of his address at Convocation, the ceremony that marks the start of the 242nd year of the College, on September 20, 2011.

“My Dartmouth education planted the seeds for my work,” says Gautam.

“I took to heart President John Sloan Dickey’s saying that ‘The world’s problems are your problems’ and dedicated my life to help resolve some of those problems, particularly in the areas of child survival, development and protection in some of the poorest countries of the world,” he adds.

As a young child, Gautam learned the alphabet from his barely literate grandfather, then left home at age seven  to study with a guru in a nearby village. Later, he was sent away to school—a three-day walk from his home—to receive a modern education. There he became friends with Peace Corps volunteers—including Zachary Hahn ’65—who taught English at the school. Gautam learned to play Scrabble with the volunteers and, as a 7th grader, surprised them by often winning the game.

Encouraged by Hahn to pursue a college education at Dartmouth, Gautam took national exams, earning scores that were among the highest in Nepal. He was admitted to Dartmouth—the College’s first Nepali student—and received a full scholarship. However, because he had obtained the scholarship through his own efforts, rather than through the government of Nepal—and perhaps because he was an ordinary village boy, not related to prominent Kathmandu families or senior government officials—Gautam could not immediately obtain a Nepali passport to travel abroad.

Disappointed but not discouraged, he persevered and obtained his passport two years later. In the interim, he enrolled at a college in Kathmandu and obtained the I.A. (Intermediate of Arts) diploma, once again ranking among the top students in the nation.

At Dartmouth, he was active in the anti-Vietnam War movement and developed an interest in United Nations efforts to bring peace to Southeast Asia. Gautam also founded the Dartmouth International Student Assembly.

“American students needed to hear more about what life was like for international students,” Gautam told Dartmouth students in an audio interview. “I would advise students to act like citizens of the world.“ He continued, “The world is becoming smaller and smaller and even Hanover, New Hampshire is now connected to Seoul, Korea and Kathmandu, Nepal and San Jose, Costa Rica. It’s important that we have that international perspective.”

In his three-decade career with the U.N., Gautam dealt at the highest levels of policy making and oversaw UNICEF cooperation in more than 150 developing countries. As he rose through the ranks, he had hands-on experience at the field level, serving in positions of increasing responsibility and leadership in Cambodia, Indonesia, Laos, Haiti, and India.

Dartmouth recognized Gautam’s work in 2009, awarding him the Lester B. Granger ’18 Award for Lifetime Achievement for his longtime commitment to humanitarianism and children’s welfare. Hahn, the Peace Corps volunteer, attended the awards ceremony to see Gautam honored.

Now retired, Gautam says he is glad to be back in Nepal after nearly four decades away from his homeland. In addition to rediscovering his own country, he informally advises Nepal’s political and civil leadership on its peace process, the drafting of a new national constitution, and on issues related to reconstruction, development, and human rights.