“There are very few ‘first-evers’ left at Dartmouth and this is one of them,” Sam Hopkins, associate athletic director for external relations, says of the inaugural night football game at Memorial Field this Saturday at 6 p.m. “This is a festive occasion—we want people to know this is a major event.” 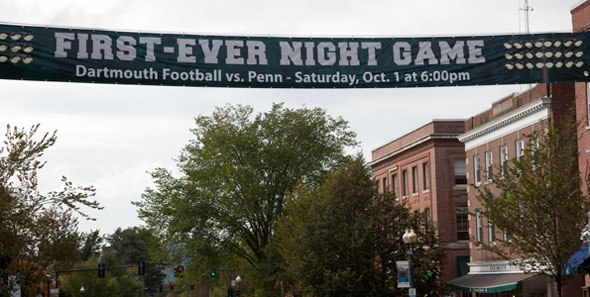 A banner advertising the first contest under the lights at Memorial Field stretches across Main Street in Hanover. (photo by Bonnie Barber)

It’s hard to miss news of the upcoming game in and around Hanover. A banner stretching across Hanover’s Main Street announces the “First-Ever Night Game.” Election-style signs that read “Dartmouth Football After Dark” have sprung up around town, and 10,000 drink coasters publicizing the game have been distributed to local restaurants. Advance Transit buses running throughout the Upper Valley carry the news as well. “We’ve left no stone unturned in getting the word out,” Hopkins says of the Big Green’s historic game, which will be played against the University of Pennsylvania, the two-time defending Ivy League champions.

The game will be televised nationwide on Fox College Sports to roughly 40 million viewers. The first thousand students who come through the gates will receive commemorative T-shirts, courtesy of the President’s Office. And, weather permitting, the game ball will be delivered onto the field by a pair of skydivers.

Preparing Memorial Field for this event was no small feat, according to Richard Whitmore, associate athletic director for facilities and operations. Seven light towers were installed at Memorial Field, three of which are on top of the Floren Varsity House, one at each end of the West Stands with another behind them, and one more in front of Leverone Field House.

Whitmore points out that the Memorial Field facility, which was originally built in 1893 and completed as it stands today in 1923, “didn’t really have any lights before. So this wasn’t just a lighting the field project, it was a lighting the stadium project, which is more complicated.” He explains that egress and emergency lights had to be installed in the stadium as well as the field lights. A sound system “that better served the stadium and had less of an impact on the surrounding area” was also put in place. 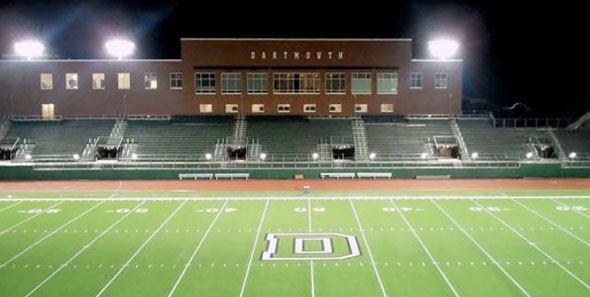 Big Green football takes on the Penn Quakers for the first night game on October 1. (photo courtesy of Dartmouth Athletics )

Anticipating 10,000-plus spectators for Saturday night’s game, extra ushers and increased security inside and outside the stadium will help ensure that people “safely get to where they’re going. We’re in a position where we’re doing something for the first time, and we want to make sure that we are well prepared,” says Whitmore. That preparation includes placing temporary lighting outside Memorial Field to ease attendees’ entrances and exits. “We’ll be using construction lights at up to six areas where we anticipate large amounts of pedestrian and vehicular traffic,” he notes.

The lighting project began the first week of August, following the Hanover planning board’s approval in May, and was made possible thanks to funding from Chris Jenny ’77 and his wife, Andi, along with other generous donors through the Friends of Dartmouth Football. Whitmore says the project was successfully completed on a tight timeline due to the hard work of Facilities, Operations and Management staffers, and thanks to help from Linda Snyder, vice president for campus planning and facilities; Frank Roberts, associate vice president for facilities and operations management; and lighting engineer Laura Black, who spearheaded the project.

Now that the lights are in place and the football team is holding its first-ever night practice on Thursday, the Department of Athletics and Recreation staff is looking forward to this important Ivy League opening game. “I think it’s going to be a really exciting environment and as professionals we take putting on a show very seriously,” says Drew Galbraith, senior associate athletic director for Peak Performance. “We’re all in anticipation of what’s going to happen under the lights and excited to see it get underway!”