A Dartmouth professor’s research on monkeys shows what humans have known for some time: when you see the color red, watch out. 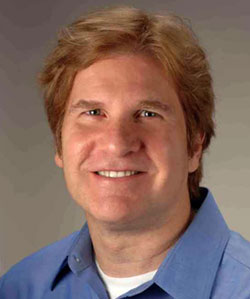 Research led by neuroscientist Jerald Kralik suggests that the human tendency to be impressed by those in red may be an adaptation for self-protection inherited from our primate ancestors. (photo courtesy of Jerald Kralik)

Jerald Kralik, neuroscientist and assistant professor in the Department of Psychological and Brain Sciences, studied male rhesus macaques, a species of monkey sensitive to color, in Cayo Santiago, Puerto Rico last year and discovered that the animals gave pause when presented with enticements from someone wearing red.

“The similarity of our results with those in humans suggests that avoiding red or acting submissively in its presence may stem from an inherited psychological predisposition,” says Kralik, who collaborated on the study with research assistants Sara A. Khan ’08 and William J. Levine ’11 as well as Seth D. Dobson, assistant professor of anthropology.

In the experiments, two human experimenters, one male and one female, entered the monkeys’ colony and found isolated males to test. Both people knelt down, placed a Styrofoam tray in front of them, drew an apple slice from their backpacks, held the slice at chest level for the monkey to see and then placed the apple on the trays. Both stood up simultaneously and took two steps back.

“Our finding—that red signals dominance in rhesus monkeys—provides support for the claim that it does so for humans as well,” he said. “In other words, the tendency to be impressed by those in red may be an adaptation for self-protection inherited from our primate ancestors. We need to be aware of this predisposition and make sure it isn’t used in a way that unfairly influences people whether purposely or inadvertently.” Kralik calls out one familiar example: “The infamous red pen of teachers may have a greater impact on a student’s confidence and subsequent performance than we may have otherwise realized. It also shows once again how much we are like our fellow primates, having shared traits that influence our minds and behavior.”