A Dartmouth-led study has found what appears to be a working relationship between two species living in the grasslands of eastern Africa: Ethiopian wolves and gelada monkeys. The researchers found that in their hunt for rodents, the wolves are most successful when they hunt near the monkey herds. 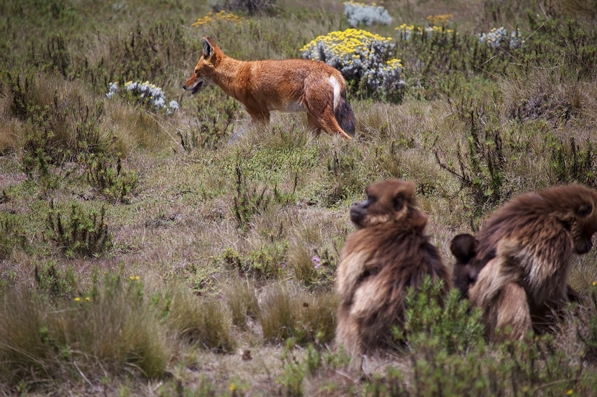 Led by Dartmouth’s Vivek Venkataraman, the team observed the wolves searching for rodents among grazing gelada monkey herds without frightening away the monkeys. Through consistent nonthreatening behavior, the Ethiopian wolves had gotten the gelada herds used to their presence as they ignored opportunities to attack the juvenile geladas.

Venkataraman, a lecturer in anthropology and a PhD student in ecology and evolutionary biology, led a team of researchers from Penn State University, California State University, Fullerton, and the Frankfurt Zoological Society in Addis Ababa, Ethiopia. The study’s findings are published in the Journal of Mammalogy.

Through extensive data collection from days spent on the Guassa Plateau in north central Ethiopia from 2006 to 2011, researchers studied a band of approximately 200 gelada monkeys that tolerate the presence of the wolves living in the same area.

According to the study’s findings, gelada monkeys would not typically move away upon encountering Ethiopian wolves, even when wolves were in the middle of the herd; 68 percent of encounters resulted in no movement, and only 11 percent resulted in a movement of greater than 10 meters. In stark contrast, the geladas always fled great distances to the cliffs for safety when they encountered aggressive domestic dogs.

The success rate may be attributed to the rodents being flushed out by the monkey herds, which disturb the vegetation as they graze, or to what may be a diminished ability for the rodents to detect predators due to a visual or auditory interference posed by the grazing monkeys, the researchers found.

The Ethiopian wolves’ relationship to the gelada monkeys reveals what may be an adaptive strategy within a broader, complex set of community dynamics, according to the study.