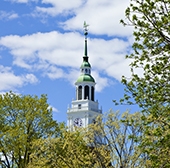 For the third year in a row, Dartmouth has earned top billing for “Strong Commitment to Teaching” in U.S. News and World Report’s “Best Colleges 2012,” also earning high marks for affordability and in rankings from guidance counselors.

This year Dartmouth shares the No. 1 teaching spot with Princeton University, which moved up from No. 2 last year to tie with Dartmouth.

“We are pleased whenever Dartmouth’s dedication to providing a world-class education for undergraduate students is recognized,” says Provost Carol Folt.

Dartmouth also continues to be among the top 10 for “Economic Diversity,” which reflects the percentage of enrolled undergraduate students receiving Pell grants. According to U.S. News, many experts believe that the percentage of students receiving Pell grants is the best available gauge of the proportion of low-income undergraduates on a given campus.

“We believe Dartmouth holds a very special place in higher education among American institutions of higher learning. Our long-standing commitment remains: to recruit top-notch faculty and invest in facilities and resources, while constantly improving our ability to produce the best students and first-rate research,” says Folt.

Dartmouth’s overall rank of No. 11 among best national universities is down from No. 9 last year. Harvard and Princeton tied for the No. 1 spot in the overall rank, with Yale No. 3 and Columbia No. 4. All four schools were also in the top four last year. The University of Pennsylvania tied for the No. 5 spot (along with Stanford, Chicago, the Massachusetts Institute of Technology, and California Institute of Technology). Duke was one spot ahead of Dartmouth, at No. 10. Rounding out the Ivy League schools, Brown and Cornell tied for the No. 15 spot.

Also this year, Dartmouth’s rank increased significantly in the “High School Counselors’ Picks,” to No. 5, up from No. 11 last year. Harvard, MIT, Stanford, and Yale tied for first place in this category, with Dartmouth, Brown, Columbia, and Princeton tied for the No. 5 spot.

In addition, Dartmouth ranked No. 7 in the “Great Schools, Great Prices” category, a calculation that takes into account quality as well as net cost for a student who receives the average level of need-based financial aid. Fifty-two percent of Dartmouth’s students receive grants based on need. The Great Schools ranking lists Harvard, Yale, Princeton, Stanford, MIT, and Columbia, respectively, ahead of Dartmouth. But, at 52 percent, Dartmouth has a higher percentage of students receiving need-based aid than Stanford and Columbia.

Dartmouth ranked among the top schools in terms of “Economic Diversity,” with 16 percent — up from 13 percent last year — of Dartmouth’s students receiving Pell grants, most of which are awarded to students with family incomes of under $20,000.

Dartmouth and was also cited for outstanding “study abroad” programs and for “undergraduate research/creative projects.” The College has offered off-campus programs led by the College’s faculty since 1958. More than 60 percent of undergraduate students participate in at least one of Dartmouth’s Foreign Study Programs or Language Study Abroad programs. Additionally, the rankings note that the Carnegie Foundation has classified Dartmouth as a school with “very high research activity.”

“At Dartmouth, our future plans start from a position of strength. There are two strong forces that we believe contribute to this foundation: our culture and quality of learning. The intellectual devotion of our faculty to both teaching and research, combined with a rich sense of community, is what our students cherish. We continue to build on that foundation,” says Folt.