First Academic Lecture for Class of 2015 Focuses on Global Economics 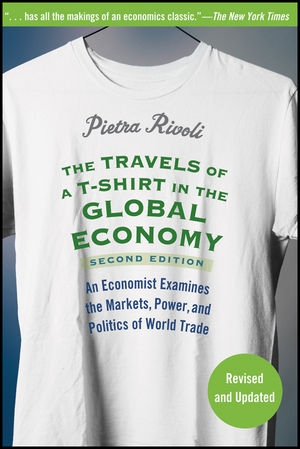 The story of how one cotton T-shirt was made imparts lessons of economics, globalization, and perspective, said Irwin, who will deliver the first academic lecture to members of the Class of 2015.

On Monday, September 19, Irwin will speak on The Travels of a T-Shirt in the Global Economy, by Pietra Rivoli. The evening talk, only for members of the incoming class, is their introduction to study at Dartmouth: “It’s their first bonding intellectual experience,” he notes. Irwin hopes it will represent the “beginning of a lifelong journey of lifelong inquiry.”

The book, he says, “is a story of how we take the simplest things for granted. T-shirts, you buy them for 10 bucks, you don’t think that much about them. But it’s a mind-boggling process to bring them to the consumer. And everything we touch has that story,” said Irwin, the Robert E. Maxwell ’23 Professor of Arts and Sciences. 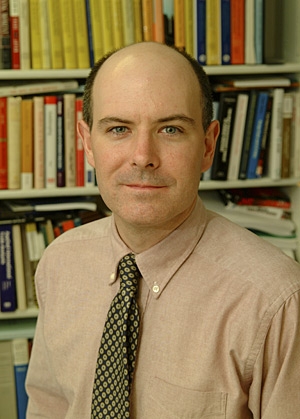 Professor Douglas A. Irwin’s lecture at New Student Orientation  will focus on the Class of 2015 summer reading, The Travels of a T-Shirt in the Global Economy, by Pietra Rivoli.  (photo by Joseph Mehling ’69)

The lecture is one of many events in New Student Orientation for members of the Class of 2015. Incoming students have had a summer reading assignment since at least 2002, when Aldous Huxley’s Brave New World was the book and religion Professor Ron Green was the lecturer. Last year, students read 1491: New Revelations of the Americas Before Columbus, by Charles Mann, and heard from Professor Colin Calloway, the John Kimball Jr. 1943 Professor of History and Professor of Native American Studies.

The T-shirt author Rivoli bought for $5.99 in a sale bin at a Ft. Lauderdale, Fla., drugstore had been on a global road trip by the time she purchased it. Made from cotton grown in West Texas, the shirt had already been to Shanghai and Miami. It would later pass through Brooklyn and finally to a used garment market in Tanzania.

Irwin said the book illustrates the complexity of the world economy. But it does the job in an easy-to-understand manner, one that is appealing not only to future economics majors. “It’s not too technical. What the book does is tell the story in a very simple way, with no jargon,” he says.

“He’s one of the people I most admire in the field,” she says. “In Irwin’s own writing, he puts current debates on economic problems in a fascinating context. It’s a wonderful opportunity for students to be able to hear from him.”