Bound by their enthusiasm for Dartmouth—a record-breaking 95 percent participated in Dartmouth Outing Club orientation trips—the 1,115 members of the Class of 2015 come from a range of cultural and geographic backgrounds. They officially became Dartmouth students during a Matriculation ceremony presided over by President Jim Yong Kim on September 14. 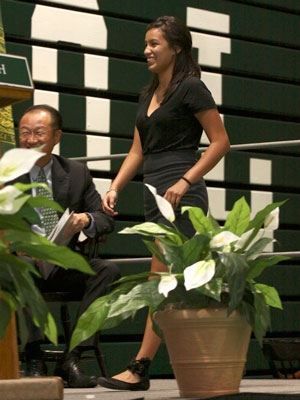 Jessica Valles ’15 of Los Angeles, Calif., crosses the stage while President Jim Yong Kim looks on during Matriculation. She received her class pin from Roger Hansen ’65 (not pictured). (photo by Zachary Ingbretsen ’11)

“I came here not only for the academic reputation but because of the community—everyone is so welcoming,” says Jay Keating ’15 of Bronxville, N.Y., who noted that he hopes to study a breadth of disciplines, including mathematics, philosophy, physics, and English. “It already feels like home.”

Forty-five percent of the students will receive financial aid—the average scholarship for 2011-12 is $38,529—and ten percent are the first in their families to attend college. They come from 47 states, with California, Connecticut, Massachusetts, New Jersey, New York, and Texas being the most represented.

Three percent are Native American, including Monica Stretten ’15 from southern California. A member of the Chickahominy tribe, Stretten says she is planning to study Native American Studies while on a pre-med track. She came to Dartmouth partly because of its diverse student body and its beautiful natural setting. “I’m looking forward to seeing snow for the first time,” she says.

As is typical with a Dartmouth class, the ’15s have stellar academic credentials. Of those reporting rank, 30 percent were valedictorians and 11 percent were salutatorians. The average SAT reasoning test score for the class is approximately 2,170 (out of a possible total of 2,400).

Some already have specific aspirations to change the world. Craig Sylvera ’15, a first-generation college student from Meraux, La., says he plans to study philosophy and government, and he hopes to use his Dartmouth education to help assist the governments of countries in Sub-Saharan Africa. 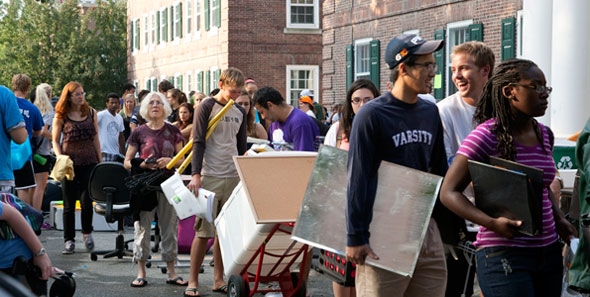 Maria Laskaris ’84, dean of admissions and financial aid says, “I’m struck by this group of students’ level of activism. Members of this generation are sometimes criticized for living in a virtual environment. But I sense a deep level of personal engagement and understanding of international, cultural, and environmental issues. They want to make an impact.”