Classics Professor Roger Ulrich takes hands-on research to new heights and shares his passion for the past with today’s students. 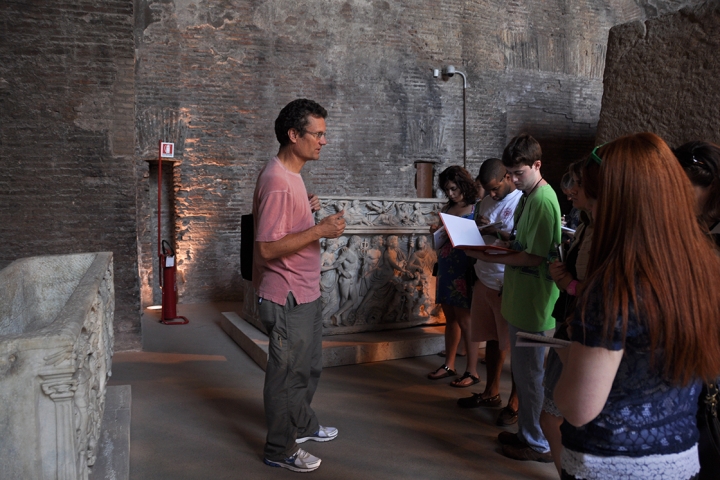 Roger Ulrich ’77 discussing sarcophagi iconography at the National Museum of Rome with his students in the classics department’s Foreign Study Program. (photo by Kasia Vincunas ’11)
9/27/2011
Body

How seriously does Roger Ulrich ’77, the inaugural holder of the Ralph Butterfield Professorship and chair of the Department of Classics, take the concept of a hands-on approach to research? While preparing his 2007 book, Roman Woodworking, Ulrich decided to embark on some major woodworking projects so that he “could speak with some authority.” Did Ulrich fill his home with hand-made bookcases or inlaid tables? No, he built two roofs—one pedimental and another hipped—onto his house.

“My house needed a couple of porches, but I also wanted to try some ancient Roman roofing techniques,” explains Ulrich, who is an expert in Roman architecture. Specifically, he wanted to understand how someone, like a Roman carpenter, could compute and cut a complicated compound angle without much knowledge of math or geometry. “How did they do that accurately using only a foot-long ruler and a square?” Ulrich asks.

Ulrich’s practical experiments helped him to write about Roman roofing practices in his book and provided the topics for presentations at national conferences.  A related project landed him on top of a ladder in Pompeii measuring hundreds of holes left by vanished wooden floor joists in standing walls. This kind of field research led to new conclusions about the framing practices and upper floor construction used by Roman builders in first century A.D.

As a teacher, Ulrich strives to convey to his students the remarkable level of sophistication that can be achieved with the “really quite primitive” instruments that were available to Roman builders.

“The fact that the Pantheon, the great domed rotunda in the center of Rome, is still standing is remarkable,” he says. “It was certainly the largest free-spanned covered space in the ancient world, and when they built it nothing on its scale had ever been built before.

“It’s a concrete structure and they didn’t have the rebar to reinforce it as modern builders do. And we have to remember that it’s in an earthquake zone. What they were able to achieve would strain technologies today.”

Ulrich, who teaches courses in Roman archaeology and Latin, developed a new course on ancient technology after writing about the topic for the Oxford Handbook of Engineering and Technology in the Classical World. In “Greek and Roman Engineering and Technology,” students apply what they learn from class readings and then construct things using ancient technologies in the College’s ceramics and woodworking studios. Among the items his students have reproduced is a Roman scorpio, an artillery piece “that shoots bolts quite effectively,” Ulrich says.

Calling the Romans the “masters of efficiency in terms of organizing labor and materials procurement,” Ulrich says their invention of concrete “transformed what the Roman world looked like.” The Romans also utilized solar planning in building design, and green architects now study their structures.

“To heat and cool houses, ancient technology took advantage of how the sun moved during the day or year, and this played a role in the placement of rooms,” Ulrich says. “You’d have two dining rooms, for example, one that faced south in the winter and north in the summer. The careful orientation of a building in terms of sunlight and prevailing winds is one of the practical lessons to be learned from ancient times.”

Ulrich is also the eye behind a popular and growing online gallery of over 1,200 photos of ancient objects, archaeological sites, and Roman portraiture. Hosted at Flickr under Ulrich’s screen name “Ortygia,” the collection nets about 2,000 visits each week and is an invaluable tool for scholars and museums. The English Heritage and National Trust, for example, recently used his images of portraiture of the Roman emperor Hadrian for its 2011 Housesteads Fort at Hadrian’s Wall exhibit.

“I photograph a lot of artifacts while I’m visiting museums or archaeological sites overseas,” says Ulrich, who is currently traveling through Italy for 10 weeks as director of the Classics department’s Rome Foreign Study Program. “A lot of the pieces I photograph have poor or no illustrations, so it’s nice to offer this site as a research tool to other students and scholars.  It’s a project with a lot of room for growth, and there will be opportunities for students to help me to enhance the visual database.”

His interest in photography, combined with a desire to impart a more realistic overview of archaeological sites to students, also led him to build a 3-D digital camera in 2008, the images from which can be viewed in a specially equipped classroom in Reed Hall. Thanks to this innovation, which was supported by the College’s Computing Technology Venture Fund, Ulrich’s archaeology students are able to have an IMAX movie theater experience on campus.

The lasting effects of study abroad

Ulrich, who is currently editing one book (on Roman archaeology) and writing another (ancient depictions of technology), says he didn’t set out to be a professional classicist.

A Dartmouth alumnus (and son of John Ulrich ’46, Tuck ’49, brother of Elizabeth Ulrich Potter ’80, and father of Emily Ulrich ’11), he began his undergraduate studies as a Latin major preparing for medical school. But while participating in the Greece and Rome Foreign Study Program (FSP) he says he became “fascinated by the physical and material traces of Roman culture.” Now he shares his passion for the past with today’s students by leading the Rome FSP, something he’s done nearly every other year since 1991.

In July, Dartmouth recognized Ulrich’s outstanding research and teaching with the inaugural appointment to the Ralph Butterfield Professorship. The endowed chair is funded by a bequest from the estate of Ralph Butterfield, Class of 1839, and supports a faculty member in the field of paleontology, archaeology, ethnology, or a related subject.

“I love teaching, I love working with students, and I really enjoy working with students outside the classroom,” Ulrich says. Reporting from the study abroad program, he noted, “Ninety percent of the time we’re in the museums or at the archaeological sites. It’s a small group and it’s very intensive, so you have their attention 100 percent of the time. Many of them come back and have exciting ideas about independent projects they want to do or future research, and that’s just wonderful.”