Big Green Looks for a Homecoming Win Against Columbia

Each year, the Homecoming football game is a bittersweet time for Big Green seniors, a fact not lost on a quarter of this year’s 120-man team.

Even if some of them go on to play after college, it won’t be the same, says defensive tackle Eddie Smith ’12.

“There’s no homecoming at the pro level,” he says. “I’ve been thinking about what kind of legacy I’m going to leave. When people look back at our team in the record books, I want to make sure that we do Dartmouth football proud. That we not play for ourselves—we play for each other, play for our honor, and play for our pride.” 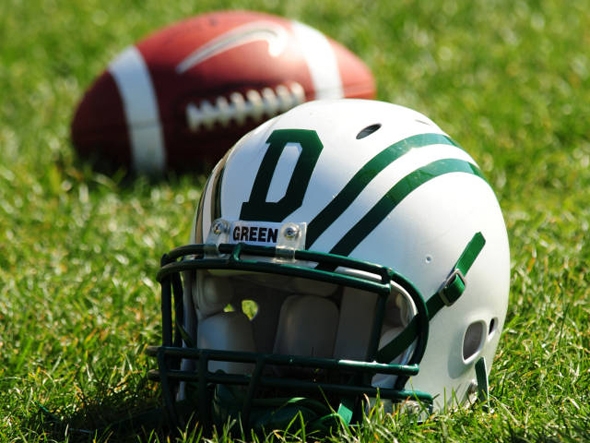 The Big Green takes to the field October 22 for the annual Homecoming game, this year against the Columbia Lions. Game time is 1:30 p.m., at Memorial Field. (photo by Peter Grom)

The pressure is on Dartmouth, with a 1-4 season going into the Homecoming contest against the Columbia Lions, who are winless this year. The October 22 match-up is a big game for Dartmouth, says running back Nick Schwieger ’12, one of the team’s captains.

“This is Homecoming, and everybody’s going to be fired up for it,” he says. “We have to play our game and send the seniors out the right way. This football team’s a brotherhood and we don’t have many more of these left, so why not do it right?”

The season so far “isn’t the deal we wanted, but it’s the deal we have,” says Harry Sheehy, director of Athletics and Recreation. “We hope that our young men will play well, but for our seniors, they’re now seeing the end and that really, really requires them to lead. When you get in tough times, leaderships not an option, it’s a must.”

The Big Green boosters are also looking for another win and have been hanging tough with the team, says Bob Downey ’58, chairman of the Friends of Football Advisory Board.

“It’s understandable that some Dartmouth football supporters have become discouraged with our 1-4 record, but the vast majority of the Friends of Dartmouth Football are not ‘sunshine patriots’ and will support our players and coaches through thick and thin even when the times do try our souls,” he said.

The team is ready to turn its record around, adds Coach Buddy Teevens ’79.

“We’ve had a great week of practice and we’re ready to go. There’s a good buzz, a feeling of enthusiasm, energy, and excitement,” he says. “We’re a good football team when we execute well. And we need to execute on all cylinders in order to have success.”