The October 11 Republican Presidential Debate at Dartmouth brought over 300 members of the international, national, and local media to campus, including The New York Times, The Wall Street Journal, USA Today, NPR, all of the major television networks, and debate partners Bloomberg News and The Washington Post. The College shared the spotlight with the candidates, as many media outlets turned to Dartmouth experts and community members for debate commentary and analysis. 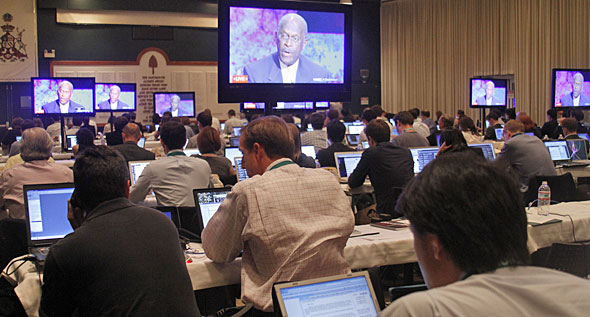 Journalists cover the debate in progress from the filing center in Alumni Hall. (photo by Michael Sugimura ’14)

Selections from the debate-day coverage:

Bloomberg broadcast live television (from the Green) and radio throughout the day, interviewing many Dartmouth people. Among them, Lizzie O’Leary of Bloomberg Television’s Street Smart spoke with President Jim Yong Kim about the challenges facing U.S. health care and the value of a liberal arts education. She also interviewed Professors Dean Lacy and Linda Fowler to get their take on the candidates and balancing the federal budget. Professor Andrew Samwick delivered post-debate analysis on InBusiness with Margaret Brennan. Dartmouth students graduating in 2012 also sat down with Brennan to talk about job prospect and their own economic outlook. Dartmouth Now intern Jessica Chen ’12 even had a chance to turn the tables and interview Bloomberg’s Tom Keene to get his pre-debate perspective.

[[{“type”:“media”,“view_mode”:“media_large”,“fid”:null,“attributes”:{“class”:“media-image alignleft”,“typeof”:“foaf:Image”,“style”:“”,“width”:“100”,“height”:“100”,“alt”:“Washington Post”}}]]The Washington Post broadcast the debate live online (watch the full video) and reported that, “A comfortable and confident Mitt Romney solidified his front-runner status on Tuesday night … .” However, in response to Romney’s claims about government expansion and threats to the free market economy, Glen Kessler declared on the Post’s Fact Checker blog: “Romney’s statement that the United States is ‘inches away’ from not having a free economy is rhetorical nonsense. There are many metrics one could use to disprove it.”

After moderating the debate, Charlie Rose broadcast a special edition of his own show live from Spaulding in front of a student audience. Debate co-hosts Julianna Goldman of Bloomberg and Karen Tumulty of The Washington Post joined Al Hunt, Matt Dowd, Mark Halperin, Rich Lowry, and Dan Balz to deliver live analysis. Dowd, a Bloomberg analyst, remarked on Rick Perry’s lackluster performance, saying, “Rick Perry, over a year ago, said, ‘I don’t want to be president. It’s not something I’m interested in. I don’t like Washington. I like Austin, I want to stay in Austin.’ I think what we’re now learning, is that he was telling the truth.”
Image

In “Coming To The Table: Why The Candidates Are Easier To Take Sitting Down,” National Public Radio focused on the positive effects of the debate’s roundtable format: “By sitting everyone down, the sponsors managed to elevate the discussion. The candidates had plenty of opportunity to badger and beard each other, but they did so in a more civil and substantive manner than in any debate to date.”

[[{“type”:“media”,“view_mode”:“media_large”,“fid”:null,“attributes”:{“class”:“media-image alignleft”,“typeof”:“foaf:Image”,“style”:“”,“width”:“100”,“height”:“100”,“alt”:“The New York TImes logo”}}]]Mitt Romney focused on “presenting himself as the leader who is best prepared to take on President Obama,” reported The New York Times, which characterized the event as “the least combative of the debates so far, with questions limited to the economy. … “The debate, which was sponsored by Bloomberg News and The Washington Post, unfolded for nearly two hours as more of a conversation. The eight candidates were seated around a large table, joined by three moderators, who asked questions before an audience of voters in New Hampshire.”

“Just as debate hosts Bloomberg and The Washington Post promised, moderator Charlie Rose focused exclusively on the economy and issues that directly affect it,” reported Politico in “Debate cools it on hot-button issues,” noting the absence of volatile topics such as immigration and the death penalty. “Herman Cain’s 9-9-9 economic plan played a starring role, along with conversations about traditionally dry topics like the Federal Reserve, home ownership, financial regulatory reform, the deficit, health care waivers, Medicare spending, and energy. What the evening of economics revealed was a surprising consensus among the Republicans seeking to be the party’s standard bearer in 2012.”

On the day of the debate, Assistant Professor of Government Brendan Nyhan wrote in The Huffington Post about what Rick Perry needed to accomplish. “Herman Cain has sucked the oxygen out of Perry’s bid for anti-Romney conservatives. As such, Perry’s task for tomorrow’s debate and the weeks ahead, is to reassure Republicans of his conservative credentials and re-establish himself as the real alternative to Romney.”

Following last night’s debate, Rick Perry visited Dartmouth’s Beta fraternity house and spoke with students. In “Rick Perry says ‘debates are not my strong suit,’”CBS News reported, “While Perry has been adamant about assuring older Americans—those 55 and up—that Social Security will be there for them, he told the students that the popular retirement program is endangered for ‘your generation’ and pushed private retirement accounts instead.“

[[{”type“:”media“,”view_mode“:”media_large“,”fid“:null,”attributes“:{”class“:”media-image alignleft“,”typeof“:”foaf:Image“,”style“:”“,”width“:”100“,”height“:”100“,”alt“:”Valley News“}}]]The Valley News ran a cover story (not available online) on a Rockefeller Center focus group. Sixteen students—eight men, eight women; four Republicans, four Democrats, and eight independents—were chosen by Professor Ron Shaiko to discuss and evaluate the GOP presidential candidates and explore the issues at play in the debate. While Mitt Romney was judged by the students to have been the ”clear winner,“ Texas Gov. Rick Perry’s performance ”was among the worst reviewed of the night.“ Each of the remaining candidates scored points with the students, particularly businessman Herman Cain, but none were seen by the group as truly ”presidential."