Diana and Bruce Rauner ’78 have given $1.3 million to endow a scholarship for Dartmouth undergraduates from the Chicago area. The annual scholarship will name three Rauner Scholars at Dartmouth, with preference for graduates of Chicago public schools and the Chicago metropolitan area who have acute financial need. 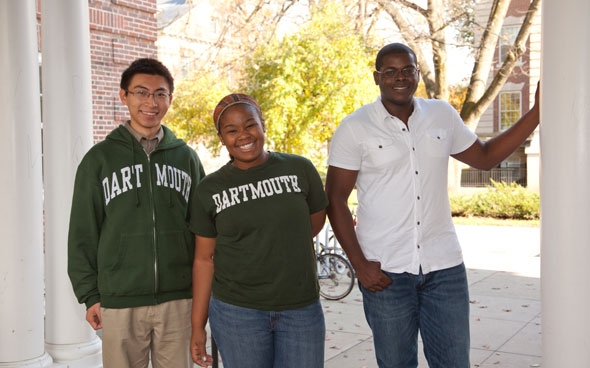 “Financial aid is the best tool we have to make sure that the best and brightest can always get a Dartmouth education, regardless of where they come from or what their families earn,” said President Jim Yong Kim. “The Rauners’ gift reflects both their love for the College and their commitment to creating transformative educational opportunities in their hometown of Chicago. We’re grateful.”

Bruce Rauner said, “We want to be able to say to the public high school students of Chicago: if you have the drive, the talent, and the perseverance to go to a college like Dartmouth, we’re going to make sure cost does not stand in your way.” In the 2010–2011 academic year, there were 75 students from the Chicago metropolitan area at Dartmouth, 44 of whom graduated from public schools; 40.9 percent of these public school graduates received need-based financial aid.

Active civic leaders and education reform advocates in the Chicago area, the Rauners were named Distinguished Philanthropists by the Association of Fundraising Professionals-Chicago in 2008 and recently received Golden Apple Foundation’s Community Service Award. Bruce, who graduated from Dartmouth in 1978 with highest distinction in economics and earned an MBA from Harvard in 1981, is chairman of GTCR LLC, a venture capital private equity firm that he joined in 1981. He is director and former chair of the Chicago Public Education Fund, which invests in high-impact, system-wide programs to improve school leadership and student achievement. In 2010, he was appointed by then-Mayor Richard M. Daley to chair the Chicago Convention and Tourism Bureau and its affiliated Chicago-China Initiative. He also serves on the board of managers of the YMCA of Metropolitan Chicago and the president’s council of Harvard Business School, and is director of the Ravinia Festival, the Noble Network of Charter Schools, New Schools for Chicago, and World Business Chicago. Formerly he served as director on the boards of Ariel Community Academy, Chicago Communities in Schools, Teachers’ Academy of Math and Science, Youth Guidance, and the Metropolitan Pier and Exposition Authority. He has also received the Murie-Broome Award for his work to preserve wildlife habitat in the western United States.

Diana, a 1983 graduate of Yale, earned an MBA from Stanford in 1988 and a PhD in developmental psychology from the University of Chicago. She is president of the Ounce of Prevention Fund, a public-private partnership serving at-risk children and their families from before birth to age five. Previously, Diana was a senior researcher at the Chapin Hall Center for Children at the University of Chicago, where she worked with public agencies and private foundations on the evaluation of programs that support early childhood development. She serves on the board of the Latin School of Chicago and Chapin Hall Center for Children, and is a life trustee of National-Louis University in Chicago and Kohl Children’s Museum of Greater Chicago.

The first three Rauner Scholars were named this fall. Nia Foney ’15, who plans to attend medical school, graduated from Whitney M. Young Magnet High School. She is also a member of the Glee Club, Gospel Choir, and Students Fighting Hunger. Andrew Honghe Li ’15 is a National Merit Scholar and a graduate of Northside College Preparatory High School. He is interested in studying economics, international relations, environmental science, and mathematics, and is member of the Dartmouth Parliamentary Debate Society and the National Youth Association. Christian Mgbonyebi ’13 is a graduate of Oak Park and River Forest High School. A psychology major and philanthropy chair of his fraternity, Kappa Kappa Kappa, Mgbonyebi plans to attend law school.

Dartmouth is committed to keeping the Dartmouth experience within the financial reach of all students. To that end, the College admits qualified applicants need blind (meaning without regard to the applicants’ ability to pay) and promises to meet 100 percent of students’ demonstrated financial need for all four years. Undergraduates from families with incomes below $75,000 do not pay tuition and are not required to take out loans. The average scholarship package for the Class of 2015 is $38,221. In 2010–2011, 47.7 percent of Dartmouth undergraduates received need-based financial aid, including 11.4 percent of the student body who were first-generation college students. Endowments funded 43.9 percent of Dartmouth’s annual scholarship budget.

“Dartmouth relies on endowments to keep its promise to students that we will meet their financial needs while they’re here,” said Maria Laskaris ’84, dean of admissions and financial aid. “The need for scholarships continues to grow, so gifts like the Rauners’ make a huge difference.”

In addition to their commitment to the Rauner Scholarship Fund, the Rauners have named Dartmouth’s Rauner Special Collections Library, supported the College’s Strategic Resources Fund and the Class of 1978 Life Sciences Center, endowed a professorship, and given generously to the Dartmouth College Fund.