Although Robert Frost matriculated as a Dartmouth student in 1892, he soon left the College for other pursuits and had to wait until 1951, when Dartmouth awarded him an honorary degree, to receive his diploma. Now, thanks to a new agreement between Dartmouth and The Frost Place in Franconia, N.H., the College’s connection to the poet and his legacy is being strengthened and carried forward. 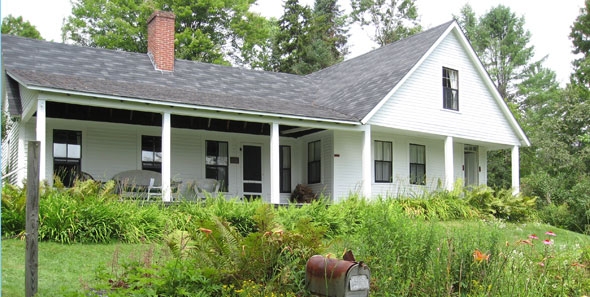 Robert Frost lived in this Franconia, N.H. farm house — which is now a nonprofit educational center for poetry and the arts — from 1915 to 1920 and wrote some of his best-known poems here. Dartmouth supports The Frost Place’s poet-in-residence program, which brings an early-career poet to live at the house during the summer. (photo courtesy of The Frost Place)

“We are delighted to strengthen our partnership with The Frost Place in support of the next generation of American poets,” said Provost Carol Folt. “This agreement honors the historic ties between Robert Frost and Dartmouth as well as the enduring ability of poetry to illuminate and challenge our society.”

Robert Frost entered the College as a member of the Class of 1896, but left within several months to marry and pursue farming and poetry. He did return, however, lecturing often to students as the Ticknor Fellow (1943 to 1949) and participating in the Great Issues program (1949 to 1962). Dartmouth College Library’s Robert Frost Collection is one of the largest and most important in the world.

The 8-acre Frost Place property was Robert Frost’s own farm from 1915 to 1920. It was there that he wrote some of his most enduring poems, including ”The Mending Wall,“ ”The Road Not Taken,“ and ”The Gift Outright,“ which he read at the inauguration of President John F. Kennedy in 1961.

”The Poet in Residence Program supports working poets, providing them the space and dedicated time to devote to their craft and placing them in the home of Robert Frost,” says The Frost Place Executive Director Maudelle Driskell. “We are grateful for Dartmouth College’s support, which will have a positive impact on the lives of the talented poets that are chosen to participate."

The Poet in Residence program is for poets who are “at an artistic and personal crossroads, comparable to that faced by Robert Frost when he moved to Franconia in 1915, when he was not yet known to a broad public,” according to The Frost Place. Resident poets live at the property for two months in the summer and deliver public readings.

Robert Hass, United States poet laureate (1995 to 1997) is among the poets who have been recognized by the residency program since its founding in 1977. Additionally, The Frost Place houses a museum and sponsors a Festival and Conference on Poetry and a Frost Day Celebration each year.