Debate Day at Dartmouth: What to Expect, See, and Do

The Dartmouth campus comes alive with activity as the college hosts the Republican Presidential Debate on Tuesday, October 11. In addition to the main event, sponsored by Dartmouth, Bloomberg, The Washington Post, and WBIN-TV, there will be much to see in Hanover—and for millions watching from a distance as the debate is broadcast live on television and the Internet.

There are a number of activities taking place at various campus venues before the debate, some offered for Dartmouth students, others also open to the general public. Visitors to Dartmouth will want to stop by the Green, where space will be provided all day for campaign boosters and other organizations and individuals who want to express their opinions.

Also on the Green, Bloomberg reporters and anchors will broadcast live and discuss the candidates’ proposals. They will interview Dartmouth students and New Hampshire business leaders. 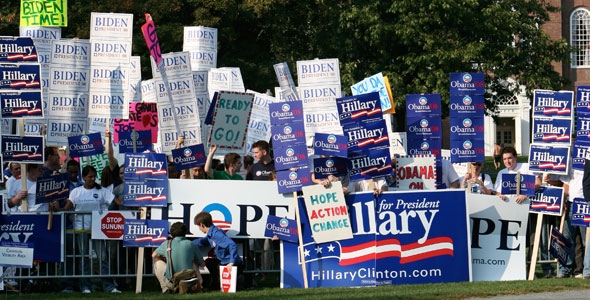 The last time Dartmouth hosted a presidential debate was in 2007, when Democratic candidates came to town. A popular venue was the Green, where candidates’ supporters gathered during the day. When Republican candidates arrive for this year’s October 11 debate, their supporters and many others are likely to once again fill the Green. (photo by Joseph Mehling ’69)

In addition to the approximately 275 members of the press corps in Hanover to cover the debate, Dartmouth public affairs writers will record the day’s events in blog posts, photographs, tweets, and Facebook updates from the early-morning set-up on the Green through the student Debate-Watch Party at Leede Area in Berry Sports Center. Stay tuned to Dartmouth Now, the college news site, for the developing story.

Many of Tuesday’s events take place in the Hopkins Center, which may be accessed via the main entrance on Wheelock Street. The Lebanon Street entrance, in the rear of the building, will be closed for the day.

Questions about the day’s events may be directed to the Dartmouth Debate hotline, at (603) 646-1900 or emailed to republican.debate.2011@dartmouth.edu.

Here’s a look at the complete list of Debate events:

What: Daylong broadcast by Bloomberg Television, interview area for use by members of the media, space for supporters of the GOP candidates and for other organizations and individuals who want to express opinions.

When: All day, Tuesday, October 11

What: Details on the day’s events, including parking, available at a number of locations

When: All day, Tuesday, October 11

What: Coffee and conversation with Michelle Lockett, global manager of social media for Bloomberg LP.

Where: Class of 1930 Room, Rockefeller Center

Bloomberg Television broadcast on the Green

Where: Outside Hopkins Center Box Office

When: All day Tuesday, beginning at 5 a.m.

What: Sixteen Dartmouth students, eight women and eight men, chosen by Professor Ron Shaiko will discuss and evaluate the GOP presidential candidates and explore the issues at play in the debate.

Who may attend: Public event, but limited seating on a first-come basis

What: An opportunity for students to talk with campaign employees and volunteers about their work, campaign issues, and learn about the candidates’ platforms.

Where: Campaigns will have rooms in Rockefeller Center and Silsby Hall

Who may attend: Dartmouth students only

Leading Voices: What’s at Stake in the Republican Debate

What: Leading journalists and educators will preview the issues to be debated. Morton Kondracke ’60, executive editor at Roll Call and a Dartmouth trustee, will moderate the discussion. Panelists are Pulitzer Prize-winning writers Pittsburgh Post-Gazette Executive Editor David Shribman ’76 and Wall Street Journal Editorial Board member Joseph Rago ’05 and Dartmouth faculty members Linda Fowler, professor of government and the Frank J. Reagan Chair in Policy Studies, and Matthew J. Slaughter, associate dean for the MBA Program and the Signal Companies’ Professor of Management at the Tuck School of Business.

Who may attend: Ticket-holders

Tickets: Reserved seating; tickets no longer available; reserved tickets may be picked up at Will Call table in the lobby outside Moore Theater. Will Call opens Tuesday, October 11 at noon.

Who may attend: Ticket-holders, news media

If you are attending: Doors open at 5 p.m.

Who may attend: Ticket-holders; live broadcast viewing (no tickets required) available in Rockefeller Center classrooms 1, 2, and 3 and Silsby 28

Tickets: No longer available; pick up reserved tickets at Will Call table, lobby outside Moore Theater, beginning Tuesday at noon.

Alternative ways to view this event: Debate airs live on Bloomberg Television, Bloomberg Radio, and streaming live at Washingtonpost.com/debate; WBIN-TV in Derry, N.H., will broadcast the debate live in New Hampshire and Massachusetts; comment on Twitter with #econdebate.

For more info: Watch for debate coverage on Dartmouth Now.

Visitors, guests, and supporters may use parking lots north of campus located off Maynard St., and in the Dewey Field complex, beginning at 4 p.m., Tuesday. Shuttle buses will operate to and from campus lots. See times in shuttle section, below. The Hanover Inn shuttle stop provides the best access to the Hopkins Center and the Green. Visitors also may use A-lot, located off East Wheelock St., about a half-mile walk from campus. There is no shuttle service to A-lot.

Leverone lot will be closed to employees. The lot will be open only for campaign buses and supporters. Employees who usually park at Leverone may use Thompson and Dewey Field lots. Davis Varsity lot will also be closed to employees. Davis lot will be used for VIP parking. VIP drivers will be admitted by lot attendant. Dartmouth Row, located off East Wheelock Street, will be open only for faculty and staff until 4 p.m. After 4 p.m., the area will be available only for VIP parking, admitted by lot attendant.

Metered parking is available in town and in the municipal parking garage, with entrances off Lebanon and South streets.