President Jim Yong Kim was the guest of journalist Charlie Rose in an interview broadcast on PBS on October 5, 2011. 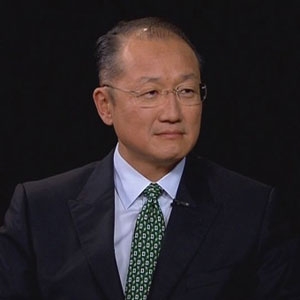 President Kim talked about how he came to Dartmouth and how his work on global health issues has informed the new Dartmouth Center for Health Care Delivery Science.

He also discussed his service on a panel tasked with increasing the influence of the liberal arts on higher education in Korea. The College has welcomed Korean visitors who see Dartmouth as a model for infusing liberal arts-fueled creativity into their educational system.

Looking forward to the October 11, 2011, Republican presidential candidates’ debate at Dartmouth, President Kim would ask the candidates how they see tackling the issue of heath-care cost equity.

Rose will moderate the Dartmouth debate, which will be broadcast nationally and around the globe by Bloomberg Television and streamed online by Bloomberg.com, washingtonpost.com/debate, and Bloomberg Mobile. WBIN in Derry, N.H., will broadcast the debate throughout New Hampshire and Massachusetts.

Watch the full interview, broadcast on The Charlie Rose Show on 10/05/11.