While preparing to attend the October 13 state dinner honoring President Lee Myung-bak of the Republic of Korea, Dartmouth President Jim Yong Kim had a bit of a wardrobe malfunction—he didn’t have a green bow tie to wear with his tuxedo. 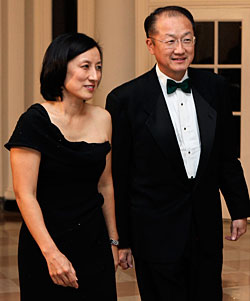 It wouldn’t have been a problem, except that Kim has worn a green tie to work each day since becoming president of Dartmouth, and he wasn’t about to break the streak. But what to do at the last minute?

Enter the resourceful Vivienne Barbadoro, senior assistant/events coordinator in the President’s Office, who at the last minute scoured Hanover and the Upper Valley in search of a green bow tie, finally locating one in a shop in West Lebanon. Appropriately dressed to represent Dartmouth, Kim and his wife, Dr. Younsook Lim, met President and Mrs. Obama and President Lee and his wife, Kim Yoon-ok.

“It was a celebration of what for President Lee and President Obama was a really good day,” Kim said. Congress last week passed a free trade pact between the United States and South Korea, as well as with Colombia and Panama.

Kim said he was glad to meet President Lee. He also met a number of prominent Korean-Americans he had heard about for years. In addition, he visited with Treasury Secretary Tim Geithner ’83 and his wife, Carol Sonnenfeld Geithner ’83, and with U.S. Special Envoy to North Korea Stephen Bosworth ’61, a former chair of the Dartmouth Board of Trustees.

At dinner, Kim was seated with Secretary of State Hillary Rodham Clinton. “We ended up talking a lot about health care,” he said, adding that he wasn’t surprised but is always impressed by Clinton’s “encyclopedic knowledge” of health-care issues.

“We also talked about the role of higher education in helping to tackle some of the world’s most difficult problems,” said Kim.

The White House East Room location for the dinner wasn’t much bigger than the Daniel Webster Room at the Hanover Inn, Kim said, with tables crowded into the elegant setting. The fall harvest dinner, which included kale, squash and honey from the White House garden, was followed by music from the Ahn Trio, chamber musicians who are Korean-American sisters, and from rhythm and blues singer Janelle Monae of Atlanta.

“It was fun talking to people in that world,” said Kim.