Dartmouth’s Republican Presidential Debate will give candidates a forum where they can argue their positions. But for thousands of Dartmouth students it will be an extraordinary learning experience that transcends the bounds of the classroom. 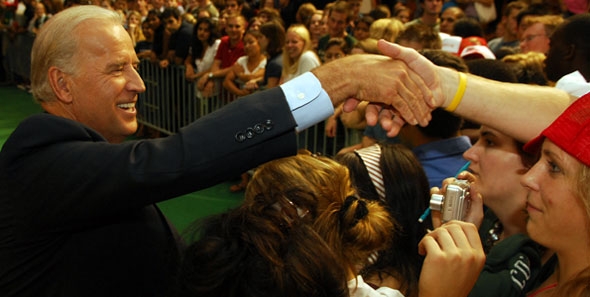 Vice President Joe Biden, who was then campaigning for president, greets Dartmouth students at the watch party following the Democratic candidates’ debate held at Dartmouth in September 2007. (photo by Kawakahi Kaeo Amina ’09)

“Every student on campus has the opportunity to see the person who will potentially be the Republican nominee for president,” says Professor Ronald Shaiko, a senior fellow at the Nelson A. Rockefeller Center for Public Policy at Dartmouth College.

One of the most singular debate day events is the student focus group run by Shaiko. The broad spectrum of 16 students from across the country share one thing—they are all undecided voters. On stage and open to the public in the Rockefeller Center’s Class of 1930 room, the students will first meet from 2 p.m. to 4 p.m. to discuss and evaluate the candidates and explore the issues. There will be about 30 seats available (no tickets required) in the room for news media and other observers.

Professor Shaiko explains that a goal of the focus group is to reach some consensus as to what the students are really looking for in a presidential candidate. What characteristics do they think are important in making that decision next November? After the debate, the group will reassemble at approximately 10:15 p.m. in Wilson Hall, room 219, to debrief and perhaps reevaluate their earlier assessments.

“The focus group is just a great opportunity for students,” says John Turro ’12, head student coordinator for the Rockefeller Center. “It is a way for students to really start thinking about how they can make a difference and how they can be well informed before they have to vote next year.”

“Meet the Campaigns” is another program where students can get some direct political contact. From 4 p.m. to 5 p.m. on debate day candidates or their campaign managers will welcome students in assigned rooms at Silsby Hall and the Rockefeller Center. “This student-only opportunity could be one of the high points of the day,” says Sadhana Hall, deputy director of the Rockefeller Center.

More than 200 students have a formal volunteer role in making the Republican Presidential Debate a successful event and many more are pitching in. Students will be ushers inside Spaulding Auditorium, the debate site. There will be students helping out in the post-debate spin room where the news media get to hear what the candidates actually meant to say. And there will be students in the filing room where the news reporters write their stories.

“Basically any moving part has a student or set of students involved,” Shaiko says. “Even now, we can still accept more volunteers to help out.”

“This is a really exciting opportunity because it isn’t every day that a college student, especially a freshmen, is able to be so involved in an event so historically important,” comments Margaret Fiertz ’15, a focus group member.

While seating is limited in Spaulding, the Watch Party organized by students for students will accommodate 2,000 at Leede Arena (advance tickets are required). The debate will air live on huge JumboTron monitors and each of the candidates is expected to visit Leede in the course of the evening. To enhance the festive atmosphere, student organizers have arranged live music presented by student groups, before and after the debate.

Varun Bhuchar ’15, another focus group member, says, “It’s fascinating and unique that we as a student body get to view this part of the presidential election process up close and personal.”