In the run up to the October 11 GOP Presidential Debate, students and members of the Dartmouth community heard from nationally recognized experts this summer in the lecture series “Leading Voices in Politics and Policy.” The series and the companion public policy course for sophomores drew inspiration from the Great Issues course—a mandatory current events class for Dartmouth seniors that ran for two decades, through 1967. 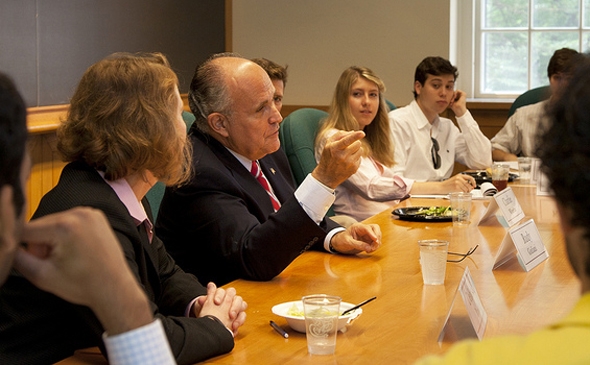 Former New York City Mayor Rudy Giuliani meets with Professor Deborah Brooks’ undergraduate government class on July 15. Giuliani, who was contemplating a presidential run at the time, was one of 15 participants in last summer’s “Leading Voices in Politics and Policy” series. (photo by Joseph Mehling ’69)

“The idea was born out of the President’s Office. There had always been a lot of interest in resurrecting some updated version of the Great Issues class,” says Charles Wheelan ’88, a visiting professor from the Harris School at the University of Chicago who led the team-taught class.

“This class allows you to meet people who are on the cutting edge of these issues,” says Sahil Joshi ’13. The series brought 15 speakers to campus over nine weeks in the summer term.

The high-level politicians and policy makers who came to campus are “experts in their fields. And you have their attention. They’re in the class specifically to speak to you,” Joshi says. “You have people like Tim Geithner and Jon Huntsman, who are busy running the Treasury or a presidential campaign. And they’re 10 feet away from you answering a tough question that you are encouraged to throw at them.”

Jon Huntsman, the former governor of Utah and ambassador to China, was among the series speakers. Other candidates who made the trip to Dartmouth were former Louisiana Gov. Buddy Roemer—who declared his candidacy in Hanover, former New Mexico Gov. Gary Johnson, and former New York Mayor Rudy Giuliani, who was exploring a presidential bid at the time. Also participating were:

“If we had two of these speakers it would have been successful,” Wheelan says. “They’re extremely prominent people. They’re very interesting. But to have all of these different people speaking about issues ranging from health care to trade to running New York City has been far more than we could have conceived of when we first started kicking the idea around.”

Wheelan says the lectures and accompanying course—“Contemporary Issues in American Politics and Public Policy”—were a success in part because of their interdisciplinary nature. Teaching with Wheelan were: Bruce Sacerdote ’90, the Richard S. Braddock 1963 Professor in Economics; Andrew Samwick, the Sandra L. and Arthur L. Irving ‘A72, ‘P10 Professor of Economics and director of the Nelson A. Rockefeller Center for Public Policy; Professor of Government Dean Lacy; and Associate Professor of Government Deborah Brooks.

Brooks says participants in the course and lecture series “benefited so much by learning directly from many of the people who are making public policy and involved in politics today.”

Leading Voices will return next summer and feature a new topic.  View a summary of news coverage and video of  the 2011 “Leading Voices” lectures on Dartmouth Now.