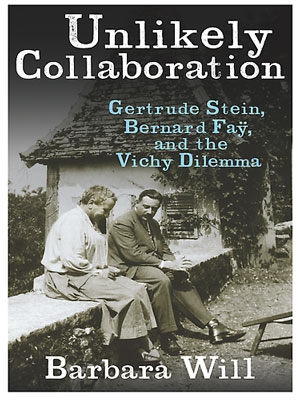 According to the National Post, there are “poets and philosophers and high-grade intellectuals who spent decades of the 20th century in thrall to fascism or communism,” but Gertrude Stein was rarely listed among them. That is, until a Dartmouth professor set the record straight.

Says the Post, “Barbara Will, a talented and resourceful English professor at Dartmouth College, has focused on the political side of Stein’s life in a revealing and absorbing work of scholarship, Unlikely Collaboration: Gertrude Stein, Bernard Faÿ and the Vichy Dilemma (Columbia University Press).”

The work focuses on Stein’s friendship with Faÿ, a French historian and pro-Nazi Vichy collaborator. It is also the first book to expose unseen archives concerning Stein’s translation of the speeches of Philippe Pétain, Vichy head of state, into English, including letters where Stein identifies herself as a “propagandist” working for Vichy France.