For 11 weeks this fall, more than 4 million viewers tuned in to NBC’s The Sing-Off and watched the 16 members of the Dartmouth Aires advance through the a cappella singing competition. After starting with 16 groups, the Aires made it to the live finale on Monday, November 28, where viewers’ votes crowned them the runners-up to champions Pentatonix. 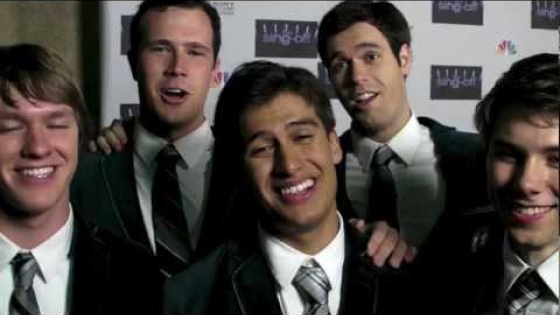 In an interview with host Nick Lachey following the announcement of the winner, Michael Odokara-Okigbo ’12 said, “I want to say a major congratulations to Pentatonix. They are our friends on the show. We are so proud of you. We know you’re going to do incredible things in music.”

Odokara-Okigbo also thanked the Aires’ supporters and said, “We tried our best to represent Dartmouth College … We’re so proud to represent the College on the Hill.”

Following the show, the Aires collectively thanked all their fans and supporters from Dartmouth: “We want to thank the Dartmouth community in Hanover and beyond for all your support these past few months. Throughout the entire experience, we tried to represent Dartmouth as best we could and will return to campus extraordinarily proud of our hard work and where it has taken us.” 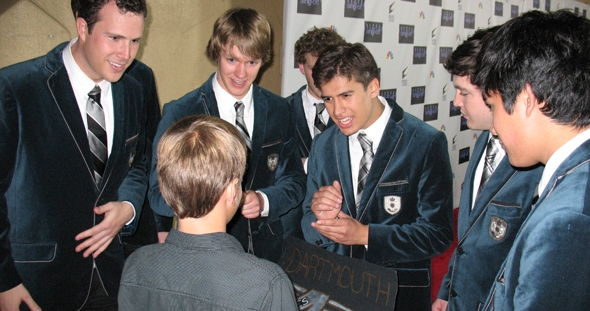 Some behind-the-scenes moments from the finale with the Aires:

> At the conclusion of their swan song, “Somewhere” from West Side Story (the footage aired post-show on NBC’s website), the Aires were ecstatic, jumping up and down as they exited Sony Pictures Studios’ soundstage 27.

Nate Davis ’14 said, “‘Somewhere’ is such a special song to the Aires and to be able to sing it on national television (sort of) after months of hard work was amazing. The moment was a perfect culmination to our experience on the show.”

> While the Dartmouth Aires went off to an official post-show celebration with the other groups from The Sing-Off, the Aires’ families and friends returned to the Doubletree Hotel in Culver City, Calif., and watched the show again as a group on two side-by-side televisions in the lobby.

“John Hart ’77, Will’s father, hung a Dartmouth banner under one of the TVs, and it was great to watch it again with all parents,” said Wayne Davis ’73, father of Nate ’14 and former Aire Ben Davis ’08. “The kids came back around 10:30 and all ‘The Sing-Off’ groups were hanging out at the hotel. There was a lot of energy and they all were having a great time together.”

This was the third trip to L.A. to watch The Sing-Off for Davis, a UBS financial advisor in Boston. His wife, Ann Merrifield, who retired in May after 19 years with Genzyme, had flown out to watch their son in five previous tapings.

“To me, it’s been very exciting to watch for these guys,” said Davis, who is on the board of visitors of Dartmouth’s Tucker Foundation. “It’s one of these typical Dartmouth experiences where you bring together a diverse group of folks with one common interest and they do an outstanding job with it.” 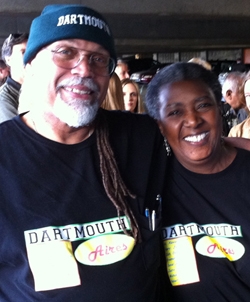 Daryl and Connie Curry, parents of Xavier Curry ’14, in L.A. for the finale wearing the T-shirts they designed for the event. (photo by Bonnie Barber)

> For Xavier Curry ’14, “The Sing-Off” finale helped facilitate a family reunion. “My mom is deathly afraid of flying and hasn’t seen my aunt in L.A. since I was young. But because of the show my aunt convinced my mom to fly out here from Maryland,” said Curry, who sang the lead vocal on R. Kelly’s “Ignition (Remix)” on week nine of the show. “I haven’t had time to go home because we taped the show all summer and then we started fall term. So I haven’t seen my parents since June. Just seeing them out here really lifted my spirits.”

When Curry stepped forward to sing one of the lead parts on the opening group number, Michael Jackson’s “The Way You Make Me Feel,” his mother Connie leapt out of her seat in the audience and cheered. His father Daryl, who had made special Dartmouth Aires T-shirts for the finale, cheered along with her and their 20-year-old daughter, Sierra, who had traveled to L.A. from the Savannah College of Art and Design. “He never tells us ahead of time when he’s going to sing a lead part!” said Curry’s happily surprised father.

> Brendan Lynch-Salamon ’10 was thrilled to share the stage with Judge Ben Folds to perform his song, “Not the Same,” during the live finale. “Ben has been a big inspiration to me as a songwriter. Working with Ben, and singing with him, was an incredible honor,” he said.

Lynch-Salamon currently lives in Hollywood with fellow Aire Justin Lerman ’10. The pair started a band, Warm Weather, and released their first EP, Dances, last summer and is about to release another EP in conjunction with a national radio PR campaign.

“We’re hoping to spin some publicity off of being on The Sing-Off,” said Lynch-Salamon. “But the main thing is it’s been such an honor and a blessing to come back and sing with the Aires on this show. To be an Aire again and feel the Dartmouth camaraderie was really cool.”

> In an article published November 29 on Grantland.com, “What It Feels Like To Watch an A Capella Group from Your College Almost Win ‘The Sing-Off,’” Rembert Browne ’09 wrote about how he became a fan of the show as a proud Dartmouth alum and graduate of The Paideia School in Atlanta, which Dartmouth Aire Clark Moore ’13 also attended.

Browne wrote of Moore, “I may or may not have convinced him to join me at Dartmouth.” Browne said he was proud of the Aires “for doing it big for our school on a national stage ... I’m looping ‘One Shining Moment: 2003’ by Luther Vandross in your honor for the rest of the afternoon. Go Big Green.”