Last month, Professor Colin Calloway was honored with the 2011 American Indian History Lifetime Achievement Award during the Western History Association Conference held in Oakland, Calif. The prestigious award is presented to an individual for “helping Native American students and advancing the study of American Indian history.” 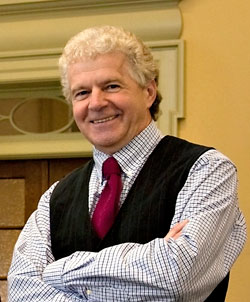 “This was a big deal for me,” said Calloway, professor of Native American studies and the John Kimball, Jr. 1943 Professor of History. “It’s recognition by my peers, other scholars of Indian history. It’s also a bit of a surprise, as I’m not Native American and, unlike previous winners of the award, I don’t have graduate students.”

The recognition was well deserved for Calloway, who is regarded internationally as a leading expert in Native American studies. He has written more than 10 books on Native American history, including The American Revolution in Indian Country in 1995, which was nominated for a Pulitzer Prize. At Dartmouth since 1990, Calloway was named to the John Kimball Jr. 1943 Professorship in 2009.