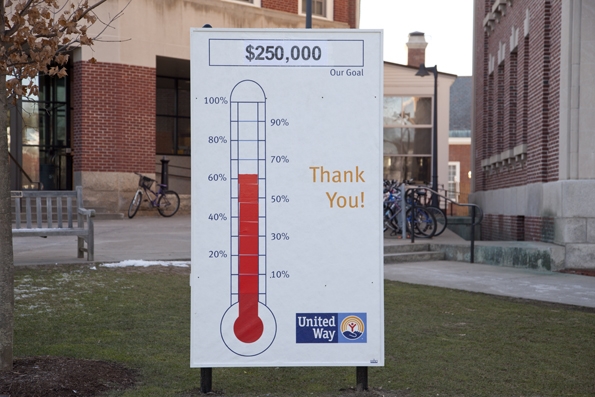 Donors have four more days to take advantage of the 100% matching gift program in this year’s Dartmouth United Way Campaign. Until Thursday, December 15, your gift/pledge will be doubled through the generosity of a group of anonymous donors. With just four weeks remaining in this year’s campaign, we’ve raised $183,913 (74%) toward our $250,000 goal! Download a pledge form here. 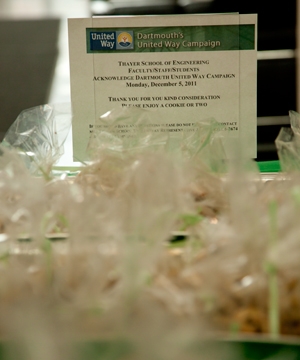 Today at Thayer School of Engineering, Judy Durell, a long time United Way coordinator, will be distributing many, many dozens of her famous homemade chocolate chip cookies to promote United Way. For many years, Judy has baked cookies for United Way to raise awareness at Thayer. United Way provided a display board and material and Judy provides the cookies.

Momentum is building for the Dartmouth United Way campaign!

A group of anonymous donors, including current employees of the College, have stepped forward to announce an unprecedented $85,000 United Way Matching Grant Challenge for all gifts made to the campaign between November 15 and December 15.

Any gift or pledge made to United Way during that time period will be matched by 100 percent, up to a total of $85,000. Your donation will be doubled.

This is an exciting opportunity for staff and faculty to increase the impact of their donations and to help us reach--or even surpass--our campaign goal of $250,000.

Dartmouth’s 2011 United Way campaign launched Tuesday, November 15, with a fundraising goal of $250,000. The Dartmouth campaign is the largest in the area, providing much-needed support for the local and surrounding communities. 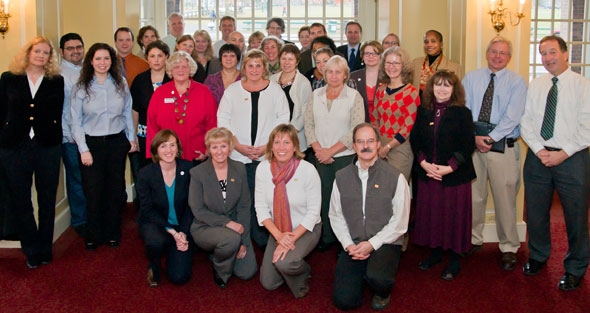 The United Way has conducted a campaign at Dartmouth College since 1971, and has been steadily forging partnerships, including the October 1, 2011, Day of Caring, to bring about positive changes that matter to the community. Last year, approximately one out of every three Upper Valley residents was served by a United Way partner agency. This year, Tropical Storm Irene brought additional challenges to the area.

In a November 14 message to the campus community, President Jim Yong Kim wrote, “Whether meeting emergency needs or working towards lasting change, the United Way makes a tremendous difference in the lives of many Upper Valley residents.” The 2010 Dartmouth campaign, Kim noted, “saw a 40 percent increase in participation from the year before. I hope this year’s campaign will again reflect the generous spirit of our community.” 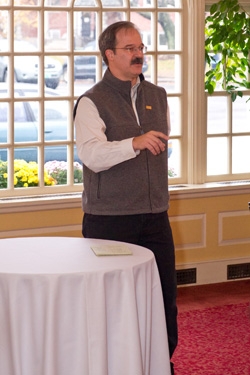 A 19-member steering committee from the Dartmouth community is directing this year’s fundraising efforts with support from Granite United Way, the regional organization formed in 2010 from three chapters including the former Upper Valley United Way.

At a campus campaign launch event on November 15, Rob Schultz, executive director of United Way partner agency COVER Home Repair, spoke about the hundreds of volunteers who work with COVER. “With neighbors helping neighbors, and the volunteers working with homeowners,” he said, “we’re trying to build community with our work.”

Diana Lawrence, director of communications for Alumni Relations and a steering committee member, recounted the story of her neighbors, whose home was completely washed away by the Saxtons River during Tropical Storm Irene. All that remained were the concrete steps and the welcome mat. “Many lives will be changed by what you do during this campaign,” she said.

Dartmouth volunteer coordinators will be distributing United Way pledge packets in the coming days, which include information about the programs supported by Granite United Way, the details of a donor incentive prize drawing, and a pledge form. Dartmouth’s campaign runs through January 6, 2012.

Follow the campaign’s progress and find out more about the people and programs it supports by visiting Dartmouth’s campaign website and Granite United Way.