A Medieval Rose Blooms at Dartmouth 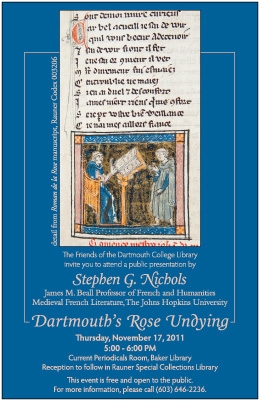 A recently acquired medieval manuscript is the focus of “Dartmouth’s Rose Undying,” a lecture presented by the Friends of the Dartmouth College Library on November 17.

On November 17, the Friends of the Dartmouth College Library present a public talk about an important recent acquisition by the College’s Rauner Special Collections Library. Stephen G. Nichols, the James M. Beall Professor of French and Humanities at the Johns Hopkins University and a member of the Class of 1958, will speak on “Dartmouth’s Rose Undying,” an early 14th-century manuscript of Le Roman de la Rose. The Romance of the Rose, as the long narrative poem is known in English, had an extensive impact on the culture of the European middle ages.

Nichols’ talk takes place from 5 to 6 p.m. in the Current Periodicals Room of Baker Library on Thursday, November 17.

In recent years, Rauner Special Collections has added significant medieval secular manuscripts to its collections: The Brut Chronicle (England, ca. 1425), a fragment of the Chronique Anonyme Universelle (France, 1461), and Boccaccio’s L’Elegia di Madonna Fiammetta (Italy, ca. 1450). All three of these manuscripts have been heavily used in Dartmouth classes and have attracted world-renowned scholars to do work in Rauner Library. The Brut Chronicle was the subject of a senior thesis written by Emily Ulrich ’11 as well as an academic conference held at Dartmouth in May 2011.

Since March 2010, when Le Roman de la Rose was acquired, a number of Dartmouth classes have used the manuscript in their coursework, including sections of Art History I, “Introduction to the History of Art”; History 44, “Medieval France”; and French 45, “Speaking in Ideals,” reports Special Collections Librarian Jay Satterfield. In addition, he notes, it has also been used in a medieval studies workshop session and in a number of individual consultations. This particular manuscript was produced only a few decades after the completion of the poem, making it a significant source for medievalists at Dartmouth and elsewhere.