POX: Save the People, the successful board game released last March by Dartmouth’s Tiltfactor Laboratory, is now available as an iPad game app. POX for iPad was made available for purchase in the App store on October 31, and retails for 99 cents. 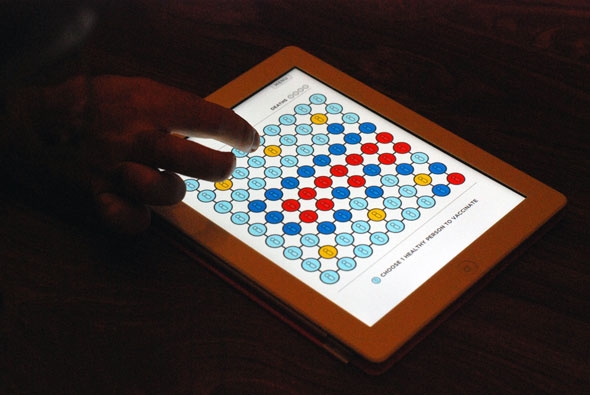 The new iPad game, POX: Save the People, is a one-to-four player game in which players fight the spread of a disease that threatens to take over a community. It is based on Tiltfactor Lab’s popular board game. (photo by Sukdith Punjasthitkul)

The digital game still allows players to learn how a disease outbreak spreads within a community, and to understand the impact of vaccinating or curing citizens. But the iPad version takes the board game to the next level by bringing the design to a digital medium and allowing for a more interactive experience, says Tiltfactor director Mary Flanagan, the Sherman Fairchild Distinguished Professor in Digital Humanities. She designed the iPad version with graphic designer Zara Downs and Max Seidman ’12.

“POX for iPad takes advantage of Apple iOS’s multi-touch capabilities to create a more dynamic and streamlined play experience,” says Flanagan of the one-to-four player game. “The core mechanic remains the same, but the iPad version allows for more seamless turn-based gameplay that is enhanced by on-screen instructions, sound and visual effects, and a stirring original musical score.” 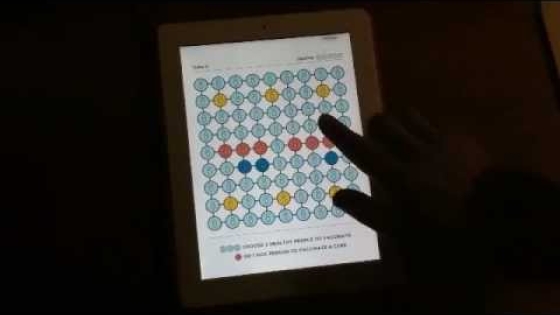 The music score was composed by Paul Orbell and audio work performed by Sukdith Punjasthitkul, A&S Grad ’98, the project manager for Tiltfactor. Game testing was conducted by Matt Cloyd ’11, Shaun Akhtar ’12, Erika Murillo ’13, and research assistant Vanessa Moy. Martin Downs, director of public health programs at the Mascoma Valley Health Initiative and collaborator on the POX board game, served as a content consultant.

It has been a busy fall for Flanagan and Tiltfactor. In September, the National Science Foundation awarded the lab a two-year, $300,000 grant to develop games that will combat stereotype threat and work toward promoting gender equity. Tiltfactor is working with the National Girls Collaborative Project on the project “Transforming Science, Technology, Engineering, and Math (STEM) for Women and Girls: Reworking Stereotypes & Bias.”

Written by
Jessica Chen '12
Share this
FacebookTwitterEmail
In the News