When he visited campus this fall, it was the first time in 40 years that Richard “Dickie” George ’70 came to Dartmouth as a civilian. Over the previous four decades he appeared on campus many times to engage his alma mater with his employer—the National Security Agency (NSA)—from which he has just retired. 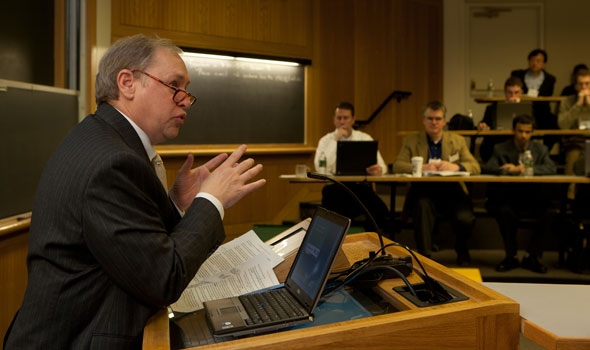 Richard “Dickie” George ’70 speaks to a working group on cyber infrastructure protection during one of his many visits to Dartmouth. (photo by Joseph Mehling ’69)

But George had not been an NSA “spook” in the John le Carré sense. His entire career was devoted to information technology security, most recently as technical director of the agency’s Information Assurance Directorate, which provides products and services to secure national security systems.

“Dickie had risen to one of the top positions in the NSA in cybersecurity, a field at the forefront of current events, but one that barely existed when he began,” remarks Thomas Candon, associate director of Dartmouth’s Institute for Security, Technology, and Society (ISTS). “We’ve been fortunate. Dickie has been so generous with his time in developing a close relationship with Dartmouth’s faculty and students.”

Dickie George ’70 is among the more than 24,000 alumni participating in the Dartmouth Career Network. Members are available to students to provide information and advice on exploring potential careers, searching for jobs, or making graduate school choices.

Alumni or students can join or access the network at:

George’s “big thing,” as he calls it, was recruiting new talent to his profession. Over the years, he made many trips to Dartmouth to meet with students. He always encouraged them to stick with science, to enter the cybersecurity arena, and of course to consider a career with the NSA.

He brought news of the NSA’s summer intern programs for information technology and computer science majors. “We have had a number of Dartmouth students participate in the last couple years and it’s really worked out well. They have done some exciting things that they can’t tell you anything about,” recounts George.

Among the alumni whose career path George guided toward NSA, one expresses his gratitude: “Although I knew I had an interest for serving my nation through my work in computer science, it was only through Dickie’s counsel that I learned where that interest would take me. The support, advice, and encouragement provided by Dickie was likely the deciding factor in my choice of work after graduation.”

In consultation with ISTS members, George has been instrumental in reshaping and re-energizing NSA’s Center of Academic Excellence program, which cultivates relationships with colleges and universities and promotes study and research in cybersecurity. The program currently has 145 members including Dartmouth.

Dickie has also had regular meetings with Martin Wybourne, vice provost for research, and recently hosted Wybourne at the NSA to discuss the pipeline of talent and the importance of higher education in developing future experts.

“Computer systems are fundamental to modern society and the challenges of security are growing constantly,” says Wybourne. “The next generation of leaders in the field will need to work effectively at the boundaries of disciplines—this is critical, and it is the challenge for higher education.”

Wybourne chairs the Institute for Information Infrastructure Protection, a nationwide consortium of leading cyber security research and development organizations, and works closely with ISTS. Although Dickie George has retired, Wybourne “very much looks forward to continuing to work with Dickie as one of the leading experts in the field.”