Dartmouth Admits 465 Early Decision Applicants to the Class of 2016

Dartmouth has admitted 465 students into next year’s entering Class of 2016 from a pool of 1,801 Early Decision applicants. The prospective students were notified via a secure website on December 9. 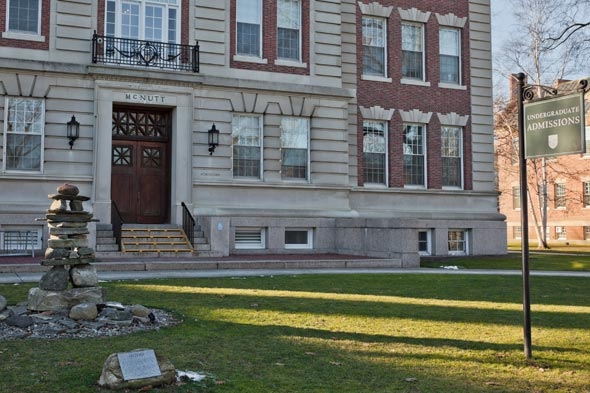 “This group gets the Class of 2016 off to a very strong start,” says Maria Laskaris ’84, dean of admissions and financial aid. “They are remarkably talented, and have demonstrated excellence not only in the classroom, but in other areas including the arts, international pursuits, athletics, and service to the community.”

The Early Decision group will comprise about 40 percent of the final class.

By applying through the Early Decision program, the applicants have made Dartmouth their number one choice over all other institutions and have agreed to attend the College if admitted. “They know Dartmouth, and they know they want to come here,” says Laskaris. “We’re pleased they’ve chosen this community as the place to help them pursue their passions.”

Dartmouth is in its second year of partnering with Questbridge, an organization that matches exceptionally talented low-income students with colleges and universities across the country, and this year’s Early Decision group includes a number of Questbridge National College Match finalists.

The number of applicants grew about two percent over last year.

“Students continue to discover Dartmouth and want to be a part of what’s happening here, and we’re happy to see that,” says Laskaris.

The deadline for Dartmouth’s regular decision admissions applications is January 1, 2012.