On December 6, a young mother and father from the Upper Valley visited the Toys for Tots warehouse on Route 120 in Lebanon, N.H. They walked down the aisles together as they carefully picked out the gifts for their two children—a five-year-old girl and three-year-old boy. “Would you like a box?” a volunteer asked them kindly. 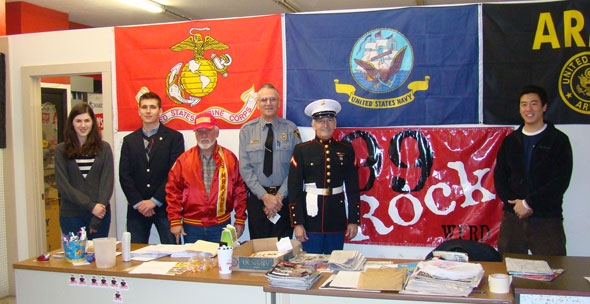 Cole and the 12-student directorate at Dartmouth Broadcasting are no strangers to public service. The radio station topped all other television and radio stations in the state to win the 2011 Public Service Campaign of the Year award for its efforts to provide and deliver much needed supplies to the victims of the tornado that struck Joplin, Mo., in May 2011.

With a simple “thank you,” the couple left with the new, free gifts, including the board game Candy Land and a small bighorn sheep stuffed animal. This family and many more like them will have gifts to give this holiday season thanks to the Toys for Tots charity, which last year distributed more than 7,000 gifts to Upper Valley families.

To donate gifts to Toys for Tots, visit one of the many drop-off locations throughout the Upper Valley.

The students and Cole collaborate with the U.S. Marine veterans in charge of the charity to develop a communications plan and to help collect and distribute toys for infants to teens up to age 18. (Toys For Tots coordinators note that teens, with more costly items on their wish lists, are the hardest to help.)

Disc jockeys at WFRD-FM promote the charity about 10 times a day to its listeners. “It’s our job to spread the word, and to get people psyched about this cause,” says Cole.

Program Director at WFRD-FM Chris Zhao ’13 volunteered at the warehouse, where he helped families check in and find gifts. Families are referred to Toys for Tots by local nonprofit organizations such as the Upper Valley Haven and Listen Community Services.

Zhao says, “The volunteers and veterans at the organization were extremely helpful and collaborative—it’s good to see the strength of the program. You can’t put a price tag on the impact it has on local families.”

The coordinator of the overall effort is Rick Maynard, U.S. Marine veteran from Post Mills, Vt. who has been involved with the charity for 13 years. “People have given so much,” he said on a recent day, in between hugs with volunteers. “One guy came by yesterday with $4,000 worth of toys. He does it every year. The response [from donors] has been outstanding, just outstanding.”

Maynard makes it clear it’s a community effort—he says truckloads of toys come from local businesses such as Coldwell Banker and from Professor Eric Johnson at the Tuck School of Business, who coordinates a drive in conjunction with Tuck’s Top Tech Toys List. Hanover-based company Hypertherm sends employees to volunteer every day, and even the owner of the warehouse has donated utilities and the space. The charity is operated by the Marine Corps League Twin State Detachment, which has about 40 members in the Upper Valley.

Toys for Tots is accepting gifts through December 23. There are drop-off locations throughout the Upper Valley. In Hanover they include Coldwell Banker, True Value Hardware, Mascoma Savings Bank, the Richmond Middle School, and the Tuck School of Business at Dartmouth.