This time of year, arts administrator Becky Bailey takes to the stage herself. Bailey, publicity coordinator for the Hopkins Center for the Arts, is one of many Dartmouth employees who commit to months of preparation, long weeks of rehearsals, and half a dozen performances of the annual Christmas Revels. This year’s show, An Elizabethan Celebration Of The Winter Solstice, opens Thursday, December 15, with related activities getting underway Sunday, December 11.

Bailey, who has a background in performance and arts education, joined the Revels as a cast member six years ago, and became the children’s chorus director in 2006. “I love working with the kids on their specific part of the show,” she says. “They gobble it up: the music, the different languages, all they learn about performing.” 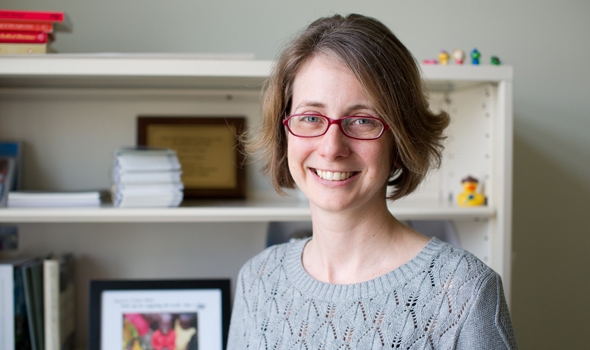 Laura Barrett, the Dartmouth College Library’s director of education and outreach, is a Revels dancer. (photo by Eli Burak ’00)

Laura Barrett, the Library’s director of education and outreach and a dancer, first auditioned for the Revels in 2009, encouraged by a friend and co-worker. Now in her third year dancing in the show, Barrett says, “One of the main draws for me is the opportunity to learn from and perform with some amazing professional dancers. This year I was able to reconnect with my favorite college professor from Boston University, Tony Barrand, to learn a traditional English broom dance that I’m performing with Chris Levey, ” from Thayer School.

“The Revels community is very supportive,” Barrett notes. “I’ve developed friendships with people at Dartmouth and throughout the Upper Valley whom I otherwise would not have known.” 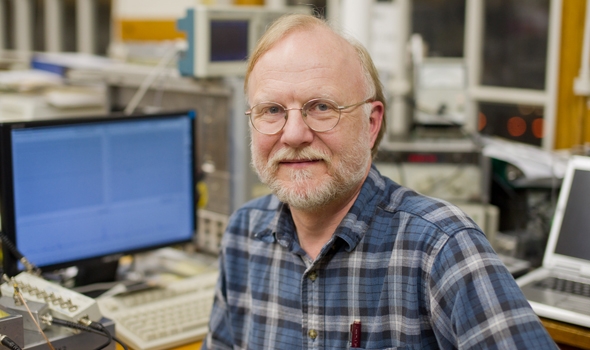 David McGaw, a research engineer in the Department of Physics and Astronomy, is new to the Revels this year. (photo by Eli Burak ’00)

Joining the crew on stage for the first time is David McGaw, a research engineer in the Department of Physics and Astronomy. Typically, McGaw is away from Hanover while the Revels are in production, “traveling for the Physics Department in support of our Arctic and Antarctic research into the Aurora and Earth’s radiation belts. This year, however, as I am sticking close to home I can devote the time to be in the Revels.” McGaw is singing tenor in the chorus and dancing in the “Abbots Bromley Horn Dance.”

Leah Romano, health benefits administrator in the Office of Human Resources is new to the Revels stage this year as well: “I have been involved in community theater in the Upper Valley since I arrived a couple years ago.” After seeing her first Revels show last winter, she made plans to audition for this season’s show—and came up with parts in the chorus and as a dancer, as well as a speaking role. 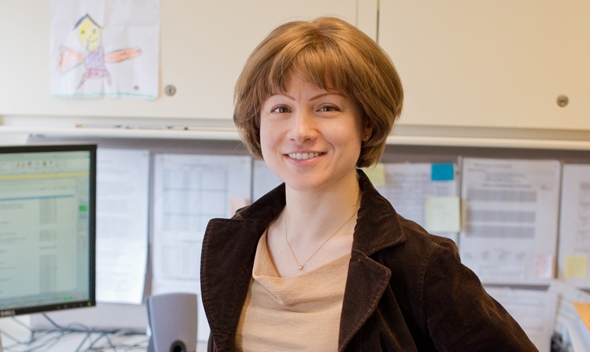 Health Benefits Administrator Leah Romano is a newcomer to the Revels cast. (photo by Eli Burak ’00)

A former theater student, Romano is “passionate about the arts.” While being part of the show demands a large time commitment, she says, “There are a lot of special people involved in the Revels. The camaraderie at rehearsals and the music lifts your spirits. And lifting spirits is at least a part of the holiday season, no?”

Information about the 2011 Revels performances—and related events that are free and open to the public—is available at the Hopkins Center website.