A study just published by a Dartmouth team of scientists in the Proceedings of the National Academy of Sciences (PNAS) advances our understanding of the sources of human exposure to arsenic and focuses attention on the potential for consuming harmful levels of arsenic via rice. 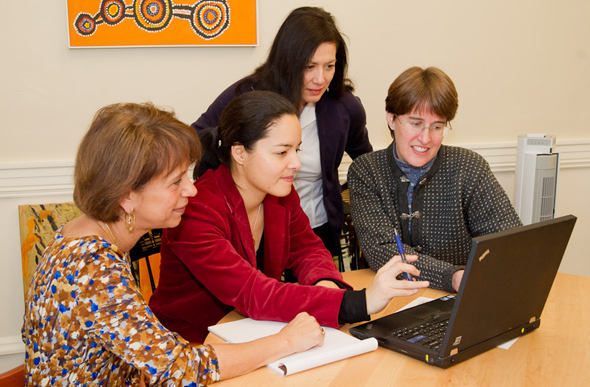 Arsenic occurs naturally in the environment and in elevated concentrations it can be harmful to human health. Common in groundwater, the World Health Organization set guideline limits for Arsenic levels in drinking water (currently 10 micrograms per liter). Concerns about arsenic exposure are now extending beyond water to rice, as underscored in the new PNAS publication. Rice is susceptible to arsenic contamination due to its ability to extract arsenic from the environment into the rice plant.

“Arsenic exposure during pregnancy is a public health concern due to potential health risks to the fetus,” says Margaret Karagas, professor of community and family medicine at Dartmouth Medical School and senior author of the paper.

Karagas, director of the Children’s Environmental Health and Disease Prevention Center at Dartmouth, and her colleagues have been active in the area of arsenic and human health for over 15 years, including work linking arsenic and bladder cancer and other conditions. She notes that research elsewhere has related arsenic at very high levels to infant mortality, reduced birth weight, hampered immune function, and increased mortality from lung cancer later in life. 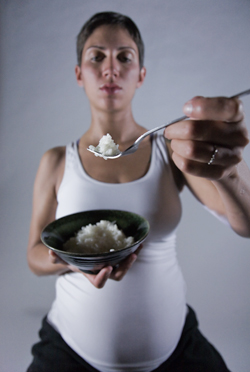 Dartmouth research showed that arsenic in urine, a measure of arsenic exposure, increased with rice consumption in a group of pregnant women in the United States. Shown in the picture is Simone Whitecloud, a PhD student in Ecology and Evolutionary Biology at Dartmouth. (photo copyright by Seano Whitecloud)

“The study presented in the PNAS paper is based upon a sample of 229 pregnant New Hampshire women whose urine was tested for arsenic concentration,” says Diane Gilbert-Diamond ’98, a postdoctoral fellow and co-lead author on the paper. The women in the study were divided into two groups based on whether or not they had eaten rice in the two days before urine collection. The tap water in their homes also was tested for arsenic concentration.

“This enabled our team to separate the potential for exposure to arsenic from drinking water from that of rice,” says Gilbert-Diamond. The urinary arsenic analyses were performed at the University of Arizona by co-author Professor A. Jay Gandolfi and colleagues and water testing was performed at Dartmouth’s Trace Element Analysis Facility by co-author Brian Jackson, PhD.

The authors conclude that their findings highlight the need to monitor arsenic in food, noting that China already has statutory limits on arsenic content in rice (0.15 micrograms of inorganic arsenic per gram of food) but the U.S. and the E.U. do not. Rice concentrations vary widely throughout the world and between species and growing conditions. Karagas emphasizes, “While this study reveals the potential for exposure to arsenic from rice, much additional research is needed before we can determine if there are actual health impacts from this source of exposure.” Tracy Punshon, research assistant professor of biological sciences and co-author says, “Rice is a nutritious food source worldwide. Ultimately any health risks, if found, would then need to be weighed against the obvious nutritional benefits of rice consumption.”

The authors also conclude that the results of the study reinforce the concern that private well water in New Hampshire is a potential source of arsenic exposure.  In this study, over 10 percent of the women consumed water containing arsenic concentrations currently above the World Health Organization (WHO) guideline and U.S. Environmental Protection Agency standard for public water systems.

“We strongly recommend that all homeowners who use a private well have their water tested regularly for arsenic,” says Kathryn Cottingham, co-lead author and professor of biological sciences. “Although health risks of rice consumption are not yet clear, the risks posed by contaminated water are well established.”

“The NIEHS and EPA programs supporting this research seek not only to advance the science in which we are engaged but, at the same time, be relevant to society,” says Dartmouth Provost Carol Folt, the Dartmouth Professor of Biological Sciences, associate director of the center and a co-author of the PNAS paper. “Our results are highly consistent with both goals, and the team effort needed to successfully implement such work is a hallmark of Dartmouth’s research programs.”

Other co-authors on the study reported by PNAS include Joann Gruber, a member of Dartmouth’s Class of 2011; Emily Baker, MD, professor of obstetrics and gynecology; and Vicki Sayarath, MPH, RD, research translation and community engagement coordinator for the Children’s Environmental Health and Disease Prevention Center.