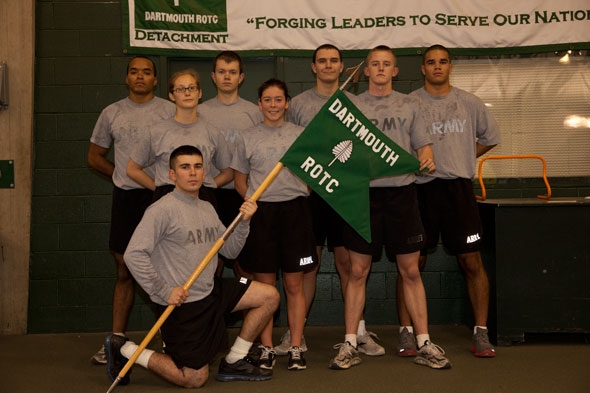 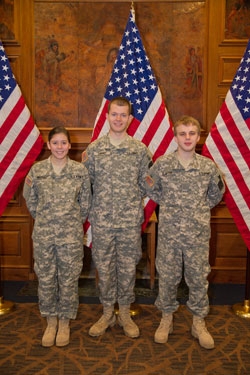 From left, Monica Wagdalt ’15, Conor Cathey ’15, and Christian Slayton ’14 following their contracting ceremony signifying their commitment to become Army officers, on December 6 at the Paul Paganucci ’53 lounge, located in the Class of 1953 Commons. (photo by Eli Burak ’00)

Dartmouth’s Army Reserve Officer Training Corps (ROTC) program, which has held its drills and classes on the Dartmouth campus since 1985, continues to grow. With 16 students, including six members of the Class of 2015, participating this term, the group is among the largest in the program’s recent history.

“This is significant for Dartmouth, and it holds promise for the program,” says Levi Bennett, head of Dartmouth ROTC. Dartmouth students deserve the credit for the increase in numbers, says Bennett. “They’re proud of ROTC and are great ambassadors for it on campus,” he says. “When students come by to learn more it’s usually because they know a current cadet.”

But Bennett is also responsible. When Dartmouth coaches, parents, or admissions staff members let him know about promising prospective students interested in ROTC, he takes action.

“I let them know that you can’t beat the quality of a Dartmouth education, and that should come first and foremost. And this education combined with military experience can create incredible leadership opportunities,” Bennett says.

One of the more robust ROTC programs in the Ivy League, Dartmouth’s current ROTC program has continuously operated year-round on campus since 1985.

An average of one to two seniors are commissioned as 2nd Lieutenants in the U.S. Army annually.

A similar number of graduates are commissioned as U.S. Marines officers through a regional recruiting program.

President Jim Yong Kim says, “Members of the United States armed forces shoulder great responsibility and make a profound commitment to service for the benefit of us all. It is a privilege to provide these cadets with a world-class liberal arts education that will inform their careers as military leaders.”

One of the cadets Bennett spoke with was Josh Rivers ’15, a graduate of Roxbury Latin School in Boston, Mass. A top student, Rivers chose Dartmouth over offers from some of the nation’s best schools, including the United States Military Academy at West Point. “West Point offers a high quality education, no doubt, but I really listened to what Sergeant Major said about the benefits of experiencing both civilian and military life, and that at Dartmouth you can have a wonderful helping of both,” says Rivers. “So far, everything he said has been true.”

Like all first-year students, Rivers says he is still adjusting to balancing his responsibilities: classes in biology, economics, and Spanish; ROTC training and coursework (six hours a week); and work in a dining hall dish room (four hours a day, five days a week). But he says overall he’s enjoying the challenge, in part because of the support of the Dartmouth community. “I’ve never been happier to wake up at six in the morning to work out with my compatriots,” he says.