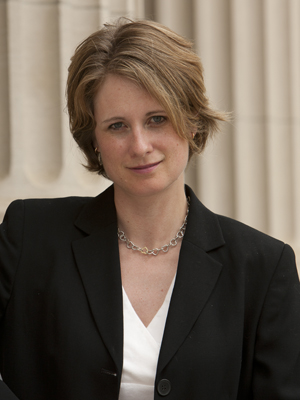 With the death of North Korean leader Kim Jong-il, national and international media are turning to Assistant Professor of Government Jennifer Lind for her expertise. (photo by Joseph Mehling ’69)

Lind has studied North Korea extensively and recently determined it would take more than 300,000 foreign troops to stabilize the country if its regime collapsed.

“If Kim Jong-un fails to consolidate power and we see a regime collapse or a civil war in North Korea, where we’re no longer sure who has authority and who actually has the nuclear weapons … that would be, of course, a truly horrifying scenario,” Lind said during her Newshour appearance.

Lind also discussed the little information known about Kim Jong-un, who appears to be stepping into his late father’s role.

“We don’t know much about him at all,” she said. “The one thing that I can say we probably can fairly conclude about him is that he wants to live, he wants to survive. And for that reason, he’s likely to continue to maintain the kind of government that his father, who also wanted to stay in power, kept up in North Korea.”

Lind has also been quoted in related articles by The Wall Street Journal and The Guardian.