Nyhan is an assistant professor of government at Dartmouth. This piece is excerpted from a November 29 essay published in the Columbia Journalism Review blog Campaign Desk, to which he contributes regularly. Read the entire piece there, which includes his analysis of the New Hampshire press’s treatment of the Romney ad mentioned below, and Nyhan’s advice to state and national journalists who are covering the campaign.

Nyhan was also quoted extensively in “When Candidates Lie, What’s A Political Reporter To Do,” published in the Huffington Post on 11/30/2011.

In Sunday’s Boston Globe [11/27/2011], reporter Michael Levenson warned of a coming “year of mudslinging.” This “rough, negative, and confusing advertising onslaught,” as Levenson calls it, is foreshadowed by recent ads run by Texas governor Rick Perry and former Massachusetts governor Mitt Romney which are “drawing howls of protest from Democrats but no apologies from the Republicans’ campaigns.” 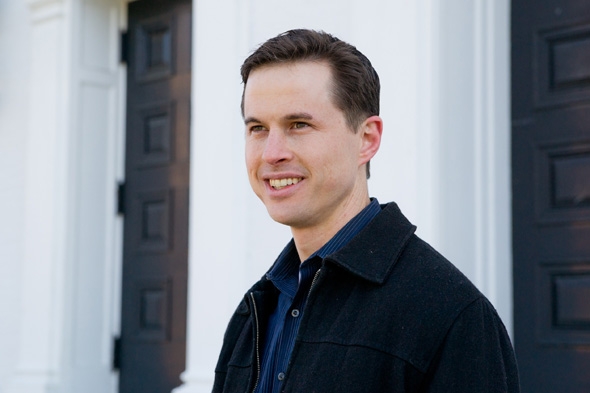 Assistant Professor of Government Brendan Nyhan has advice for state and national journalists who are covering the Presidential campaign. (photo by Eli Burak ’00)

In both cases, the evidence is compelling that the candidate ads were misleading. In Perry’s ad, he rips from context an Obama comment about the U.S. being “a little bit lazy” in trying to attract foreign investment and asks, “Can you believe that? That’s what our president thinks is wrong with America? That Americans are lazy?” Similarly, Romney repurposed a 2008 clip in which Obama quoted an advisor to John McCain in 2008 saying that “if we keep talking about the economy, we’re going to lose” and blended it into an ad that suggests Obama was talking about the 2012 campaign.

How should reporters here in New Hampshire or at the national level cover these sorts of claims?

The first obligation of journalists is to the truth. As such, it is important that reporters set the record straight when ads like these are misleading their audience. The problem, however, is that many national reporters—and the state reporters who increasingly emulate them—have been sucked in by the cult of the savvy. For these journalists, producing meta-level analysis of the effectiveness of deception as a campaign tactic is more important than correcting the factual record for readers.