The last in a long line of direct links to Dartmouth’s founder Eleazar Wheelock is a 73-year-old Texan who has never set foot on the Dartmouth campus. 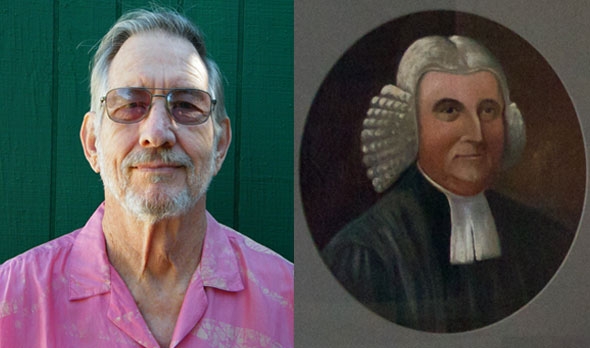 Eleazar Louis Russell Wheelock Jr., a resident of Texas who has never visited Dartmouth, and the portrait of his ancestor and Dartmouth’s founder that he recently donated to the College. (photo courtesy of Russell Wheelock)

But Eleazar Louis Russell Wheelock Jr., who goes by Russell, recently made a connection with Dartmouth, giving the College a small portrait of its founder, his great-great-great-great grandfather.

1756: His son, Eleazar Wheelock Jr., is born in Lebanon, Conn. He moves with his family to Hanover in 1769. Known as Col. Eleazar, he fights in the Continental Army during the Revolutionary War, later settling in Boat Run, Ohio. He is the brother of John Wheelock (Class of 1771), the second president of Dartmouth, who served from 1779 to 1815.

1793: His grandson, Eleazar Lewis Ripley Wheelock, is born. An early Texas settler, he is known as Ripley, and is named in honor of the Rev. Sylvanus Ripley, who was his aunt Abigail Wheelock’s husband and one of Dartmouth’s earliest professors. A residence hall on Fayerweather Row is named for Sylvanus Ripley. Ripley Wheelock graduates from West Point in 1812, just in time for the War of 1812, in which he serves with future U.S. President Andrew Jackson. Ripley settles in an area of Texas now called the Wheelock Prairie.

1830: His great-grandson, David Prickett Wheelock, is born. David goes on to serve as a Texas Ranger and a member of the Confederate Army during the Civil War.

1873: His great-great-grandson, Eleazar Louis Ripley Wheelock, is born. Known as ELR, he’s a businessman in West Texas, Florida, and Tennessee. ELR loses most of his holdings during the Great Depression.

1904: His great-great-great-grandson, Eleazar Louis Russell Wheelock Sr., is born. Known as Russell, which his father names him in honor of a business partner, he works for an oil company in Houston and is a deacon in his church.

1938: Eleazar Louis Russell Wheelock Jr., great-great-great-great-grandson of Dartmouth’s founder, is born in Houston. Now age 73, he lives in Bul Verde, Texas. Like his father, he is known as Russell, and he is retired from work with a yacht company. The last in a long line of Eleazar Wheelocks, he is married, with no children. His wife, Martha “Kiki” Wheelock, wrote about the couple’s seafaring travels in a book called The Voyage of Islita.

*The Wheelock Succession is the formal term for the succession of Dartmouth presidents, beginning with Eleazar Wheelock and continuing through Jim Yong Kim, Dartmouth’s 17th president. See the complete list: http://bit.ly/uygj1E

“The College is very happy to have it,” says Barbara MacAdam, the Jonathan L. Cohen Curator of American Art at the Hood Museum of Art.

Wheelock recently came upon the painting, which had been passed down through several generations of his family. Rather than keep it in a closet, he decided to offer it to the College.

“It’s been banging around in closets for quite a while,” he says. For many years, Wheelock had stored the painting while he and his wife, Martha “Kiki” Wheelock, lived outside the United States.

Wheelock attended a one-room schoolhouse in an impoverished part of south Texas, then made his way through the University of Texas, later teaching in a school for the children of Mexican migrant workers. But his focus was always on boats. While still at the university, he started building his first sailboat. That boat, and others, would take Wheelock and his wife across the Atlantic and throughout the Caribbean.

The pair settled in the British Virgin Islands for many years, Kiki teaching school and Russell working for a yacht charter company. His work took him to ports the world over, building new bases for the company, which has since been bought and sold several times and is now called The Moorings.

Wheelock grew up knowing that his ancestor had founded Dartmouth, but, he says, “It wasn’t a real big part of my life. It was just there. I knew it from an early age,” adding that he also knew he would never attend Dartmouth. “It was never an option. Nobody ever mentioned it.”

But that’s not the case for another Wheelock descendent, now a student at Dartmouth.

Amanda Wheelock ’13, a geography and environmental studies major from Chattanooga, Tenn., can also trace her lineage to Dartmouth’s founder. Eleazar Wheelock was a second cousin of a grandfather many generations ago—eight greats, explains Amanda.

She says she learned about the connection in a high school history class and thought she might one day apply to Dartmouth. Every so often, a classmate asks Amanda Wheelock if she was accepted at Dartmouth because of her connection to Eleazar Wheelock.

That’s hardly the case, she says she tells her friends, but jokingly adds that One Wheelock, the student-managed lounge in the Collis Center, was named for her.

“I’m bringing the Wheelocks back to Dartmouth,” she laughs.

She may not always be the only Wheelock on campus. Her distant cousin, many times removed, says he might one day visit the College on the hill.

“I always wanted to come up there, and I may sometime,” says Russell.