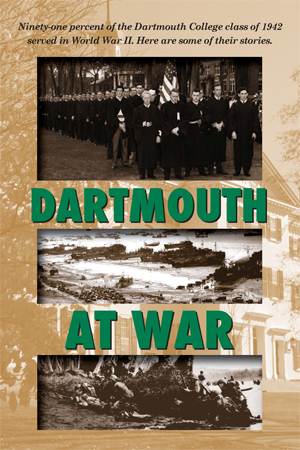 The Dartmouth Class of 1942 published Dartmouth at War in December 2011. The 448-page volume gathers memoirs, photos, and maps from more than 100 members of the class who served in WWII. (courtesy of the Dartmouth College Office of Alumni Relations)

Seventy years ago, the United States entered World War II. The tipping point in an ever-growing global conflict was the attack on Pearl Harbor. Soon after, Dartmouth men went to war.

With the assistance of a battery of editors and supporters, Leo Caproni ’42, a World War II veteran and president of his class, and his wife Joanna Caproni created a book to honor the soldiers of the Class of 1942.

The project to collect these stories began in April 2010, when the Capronis invited classmates and widows to share written accounts of their WW II experience.

Dartmouth at War, published by the Class of 1942 in December 2011, gathers memoirs, photos, and maps from more than 100 members of the class who served in WW II.