The left brain/right brain dichotomy has been prominent on the pop psychology scene since Nobel Laureate Roger Sperry broached the subject in the 1960s. The left is analytical while the right is creative, so goes the adage. 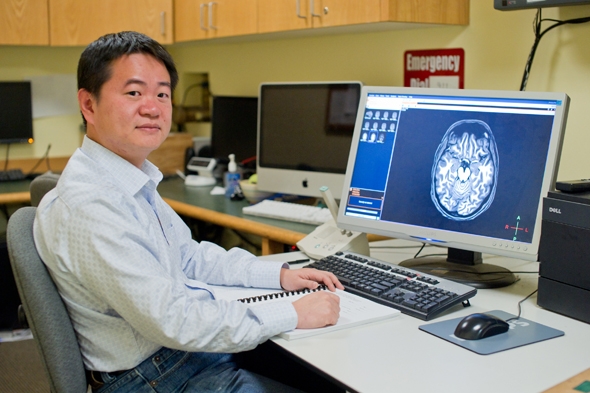 And then there is the quasi-scientific obsession with “the face.” Facial recognition technology and facial microexpressions are the stuff of television crime dramas, such as Person of Interest and Lie to Me.

But Ming Meng, an assistant professor in the Department of Psychological and Brain Sciences, has brought these two together in a way that offers new insights into the organization of the brain with implications for autism.

Meng and his colleagues have published their findings January 4 in the online edition of the Proceedings of the Royal Society B (Biological Sciences).

Meng’s novel approach is to combine functional magnetic resonance imaging (fMRI), computer vision, and psychophysics to take our understanding of brain function in a new direction. He was able to assign distinct complementary aspects of visual information processing to each side of the brain. Meng is interested in perception and considers vision its major domain. His research focuses on how the brain is organized to process visual information.

“I find such organization puzzling in terms of efficiency with both parts of the brain effectively processing the same thing—a waste of resources,” says Meng. Instead, he proposes a division of labor with right side and left doing different things.

Looking at how the brain processes faces is Meng’s key to unlocking the mysteries of the left brain/right brain paradigm.

The left and right fusiform gyri (spindle-shaped sections) of the temporal lobes were known to be the places where facial stimuli were processed, and Meng homed in here. “I wondered what the difference might be between the left brain and the right in processing the human face and this was the place to look,” he says.

But first he looked to computer-generated images for his experimental materials. Meng felt that fMRI measurement of his test subjects’ reactions only to images of faces versus non-faces offered too coarse a distinction.

“We needed to study the full spectrum, the stimuli that makes an image look like a face but not necessarily a face. These results would show the subtle differences between the left and right side of the brain as they dealt with this range of images,” he explains. A computer algorithm generated the desired range of images that he then showed to his test subjects while taking fMRI measurements of their brain activity.

“We were able to systematically quantify the face-semblance of each of our stimuli (images). This is important because otherwise we would only have an oversimplified ‘black-white’ distinction between faces and non-faces, which would not be particularly useful to differentiate the functional roles of the left and right hemispheres,” Meng explains.

“Only with the psychophysical face-semblance ratings, we’ve found that the left is involved in the graded analysis of the visual stimuli. Our results suggest the left side of the brain is processing the external physical input which resolves into a ‘grey scale’ while the right brain is underlying the final decision of whether or not it is a face.”

Application of Meng’s tripartite methodology that has shown the differences in the left brain/right brain picture could provide a template for studying patients with face processing deficits, as well as a new frame of reference for autism.

Faces constitute a particular challenge for autistic children. They typically avoid eye contact, diverting their gaze from another person’s face. Meng suggests that, “the underlying reason for their problems with social interaction may be correlated to their problems with face perception.”

Knowledge of the organization of face processing mechanisms in normal individuals provides a good starting point for exploring how this organization might be different in people with autism.