Dartmouth men’s soccer forward Lucky Mkosana of Bulawayo, Zimbabwe, became the Big Green’s third MLS draftee when the Chicago Fire selected him as the number 23 overall pick of the 2012 MLS SuperDraft on January 12. 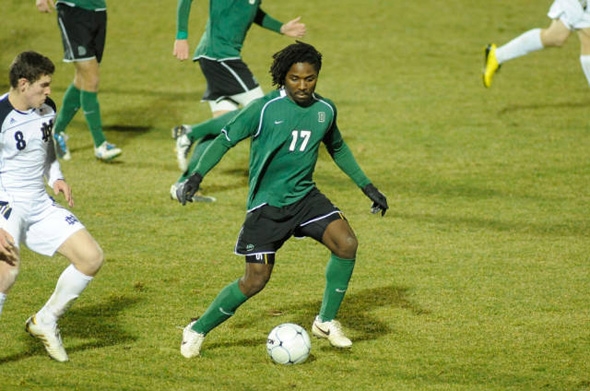 Drafted by the MLS Chicago Fire, soccer forward Lucky Mkosana ’12 was the 23rd overall pick of the league’s 2012 SuperDraft. (photo by Joe Rayond)

Mkosana joins Daniel Keat ’10 and Bobby Meyer ’99 as Dartmouth’s only players to be drafted by an MLS team. Keat was selected in the supplemental draft last season while Meyer was a third round selection (number 32 overall) in 1999. Mkosana becomes the first Big Green player to be selected in what is now known as the SuperDraft.

“No words can explain how happy I am,” said Mkosana. “I feel blessed for this wonderful opportunity and want to thank my teammates, coaches, friends, family, and the Dartmouth community for their support.”

The 2011 Ivy League Player of the Year, Mkosana capped one of the finest men’s soccer careers in program history. A four-time NSCAA all-region selection, the senior co-captain firmly cemented his name in the record books by becoming Dartmouth’s all-time leading scorer and points leader, breaking records that had stood for decades.