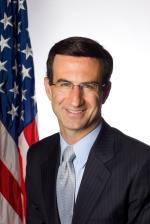 Peter Orszag, former director of the Office of Management and Budget, speaks at Dartmouth on February 8. (photo courtesy Peter Orszag)

A look at why policymaking in the United States has become so polarized will be the topic when former Obama Administration official Peter Orszag speaks at Dartmouth on Wednesday, February 8. He served as director of the Office of Management and Budget from January 2009 until July 2010.

Orszag, who is now vice chairman of global banking at Citigroup, Inc., will also discuss economic trends and the nation’s fiscal trajectory. His talk, “The New U.S. Political Economy,” is part of the Winter Term Public Program at The Nelson A. Rockefeller Center for Public Policy and the Social Sciences.

The public lecture will be held at 4 p.m., in Room 28, in Silsby Hall. Earlier in the day, Orszag will take part in a class taught by Professor Ron Shaiko, and also meet with various faculty and staff.

As Obama’s budget director, a Cabinet-level role, Orszag oversaw the administration’s budget policy, coordinated the implementation of major policy initiatives throughout the federal government, and reviewed federal regulatory action, among other responsibilities. He had previously served as director of the Congressional Budget Office, supervising the agency’s work in providing objective, nonpartisan, and timely analyses of economic and budgetary issues. Under his leadership, the agency significantly expanded its focus on areas such as health care and climate change.

During the Clinton Administration, he was a special assistant to the president for economic policy. Orszag has also served as a staff economist and then senior advisor and senior economist at the President’s Council of Economic Advisers.

Other upcoming  events in the Winter Term program include: