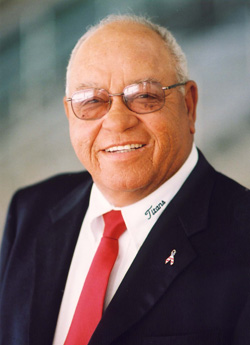 Celebrated football coach Herman Boone, who led a newly-integrated high school football team to the 1971 Virginia state championship and was the subject of the movie Remember the Titans, will be the keynote speaker at Dartmouth’s Dr. Martin Luther King Jr. celebration on January 16. The events, which run from January 13 through February 3, are capped by the presentation of the College’s MLK Social Justice Awards on January 27.

This year’s theme is “The Content of Our Character,” and the 2012 program features a wide range of events. There will be the annual Student Forum on Global Learning on January 16 with an opening address by Daniel Moses, director of the Seeds of Peace Educators’ Programs; two performances of Call Mr. Robeson, a play written and performed by Nigerian-born writer and actor Tayo Aluko, at the Hopkins Center for the Arts on January 17 and 18; a community lunch panel discussion on January 19 with four Dartmouth alumni who participated in the Civil Rights movement; and LIFTED: A Celebration of Unity and Song featuring several student groups performing in Collis Common Ground on January 20.

“This is a particularly special year for our celebration because it marks the 50thanniversary of a lecture that Dr. King gave in 105 Dartmouth Hall titled, ‘Towards Freedom,’” says Gabrielle Lucke, Dartmouth’s director of diversity training and educational programs and one of the organizers of the 2012 celebration. “It is also the 20th anniversary of Dartmouth’s MLK candlelight vigil, hosted by Alpha Phi Alpha fraternity, Dr. King’s brotherhood.”

Lucke adds that the organizers are thrilled to have Coach Boone as the keynote speaker. “The content of his character was thoroughly tested by the challenges he faced personally and professionally,” she says. “We also felt his participation would complement Dartmouth Athletics’ Peak Performance initiative, which strives to educate our student-athletes about leadership and citizenship. Hearing Coach Boone talk about character, community, and teamwork will be a wonderful opportunity for students and the entire Dartmouth community.” 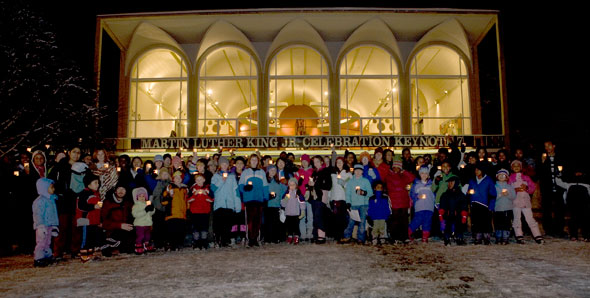 Students and community members pay homage to the life and legacy of Martin Luther King Jr. at the annual candlelight vigil, 2009 (photo by Joseph Mehling ’69)

The legendary football coach of T.C. Williams High School in Alexandria, Va., who was portrayed by Denzel Washington in the hit 2000 movie Remember the Titans, will talk about lessons in diversity, building and sustaining winning teams, and the film based on his life. The now-retired coach has acknowledged that filmmakers took several liberties with the Titans’ story (for example, the team did not sing and dance as they entered the stadium). But as he recalls in the DVD commentary for the film, one prejudicial incident he faced was toned down for the film. “There wasn’t a brick thrown through my window,” Boone says. “It was something far more devastating to any human being than a brick could be. I guess Disney, being the family movie production company that it is, felt that to depict a toilet stool coming through your window was a bit much ... I’ve never gotten over that incident that particular night, because I could never understand how anybody could feel so bad about another human being as to throw a toilet commode through a window.”

Prior to Boone’s talk, President Jim Yong Kim and Joan Leslie ’12, president of the Afro-American Society, will give remarks. Free tickets are currently available at the Hopkins Center Box Office for all Dartmouth ID holders, and will be made available to the general public at 10 a.m. on Thursday, January 12 (limit four tickets per person). A reception will follow at the Top of the Hop.