Video: A Conversation with Kayla Gebeck ’12

When Kayla Gebeck ’12 was a first year student, she was photographed by artist Mateo Romero ’89 while dancing in Dartmouth’s 2009 Pow-Wow. That enlarged photograph, which Romero painted over and transformed into one of his signature pieces, now hangs in the Hood Museum of Art. It is one of 10 large portraits in “Mateo Romero: The Dartmouth Pow-Wow Suite,” which is on display through January 22. 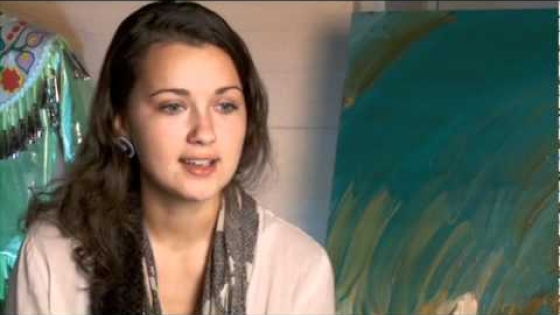 “To see it in the exhibit is kind of cool,” says Gebeck, a Red Lake Ojibwe from Red Lake, Minn. “I like my painting a lot because I’m really happy in it and I’m having fun.”

Romero’s Pow-Wow suite serves as a complement to the Hood’s expansive exhibition, “Native American Art at Dartmouth: Highlights from the Hood Museum of Art.”

As a co-president of the student group Native Americans at Dartmouth (NAD), Gebeck served as a consultant for the Hood’s wide-ranging Native American exhibit, which is on display through March 11.

“In the exhibition you see all these different styles of beadwork, regalia, and art, so it helps other people realize how many different Native American cultures there are,” she says. “I get really excited about people getting exposed to that and seeing that you can’t just generalize about Native culture.” 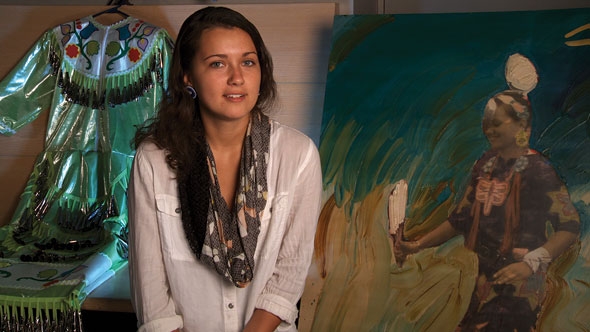 Kayla Gebeck with a jingle dress of her creation and Mateo Romero ’89’s portrait of her from “The Dartmouth Pow-Wow Suite,” currently on display at the Hood. (photo by Daniel Maxell Crosby ’02)

A double major in linguistics and Native American studies, Gebeck says her Dartmouth experience has been defined by her studies of indigenous language revitalization and also by teaching others about her culture. “I had really good mentors here my freshman year within NAD,” she says. “They taught me to be proud of who I am and to share what I know.”

She participated in Dartmouth’s linguistics Foreign Study Program in New Zealand, where she interviewed native speakers of the Maori language for a project. Last spring, she presented that paper, entitled “The Cyclical Success of Indigenous Language Programs,” at a Harvard undergraduate linguistics colloquium. She also took classes to improve her fluency in her native language, Ojibwemowin, during a transfer term at the University of Minnesota last fall.

Gebeck is now working on her senior thesis, which “utilizes established traditional subsistence practices of tribal communities as a place-based resource for cultural education and natural language acquisition.” She hopes to work in education or for a Native American law firm before eventually attending graduate school.

Gebeck has been extremely active in the Dartmouth community. She is working to help revitalize the Occom Scholars program, which helps first year Native American students pursue their research and humanitarian interests; was a co-leader for two years of the Native Dancing Society; led a physical education course in Native American dancing; and was formerly the sisterhood chair of Kappa Delta Epsilon sorority.

She also utilizes her sewing skills to help her fellow students make their Pow-Wow dresses and accessories, and conducted a moccasin-making workshop her sophomore year.

“We make regalia all year long, and normally we take a whole term to make a new dress,” says Gebeck, who can whip up a “plain dress with no design” in two hours.

In the video interview above, recorded in spring 2011 by the Hood Museum of Art, Gebeck talks about making jingle dresses, which are adorned with 365 “jingles,” one for every day of the year, the art and poetry of Native American dancing, and the Hood’s exhibitions.