Laurel Richie ’81 found herself at the forefront of women’s athletics in April 2011 when she was appointed president of the WNBA. The longtime marketing executive became the first African American woman to serve as president of a U.S. professional sports league.

Richie, who spoke last fall at Dartmouth-Hitchcock Medical Center’s eighth annual Great Issues in Medicine and Global Health symposium, “Investing in Women and Girls,” attended a Dartmouth women’s basketball practice and sat down for a video interview (below) while on campus. In her conversation with Jessica Chen ’12, the Office of Public Affairs’ Whitney Campbell intern, Richie discusses the role of women in the workforce, the importance of an active lifestyle for young girls, and her perspective on Dartmouth. 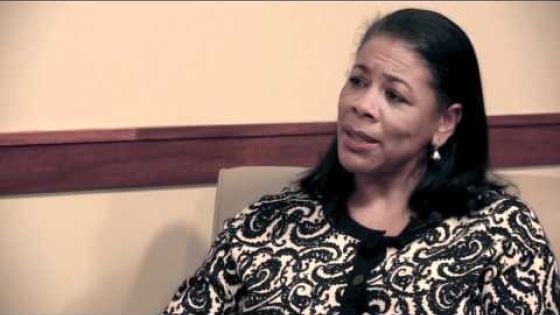 As WNBA president, Richie is striving to ameliorate many of the challenges that the 15-year-old women’s league faces. This year, Richie hopes to improve television viewership, boost game attendance, and increase sponsorships.

“I think the WNBA is one of the world’s best-kept secrets,” says Richie, whose own athletic background includes synchronized swimming and cheerleading. “I think more people need to see women in the role of professional athletes. There’s still a stigma that we leave professional athletics to the men, but I really think that’s a crime. The game the women play is different, but it is no less than the men’s game.”

Richie, an Ohio native, began her journey as a member of one of Dartmouth’s first coeducational classes, following her brother Winston Richie Jr. ’77 to Hanover.

A policy studies major at Dartmouth, Richie was involved in theater and the marching band. Prior to entering the workforce, she serendipitously met a Dartmouth graduate who worked for an advertising agency and was immediately drawn to the energy and social environment of the industry.

Richie was a senior partner at Ogilvy and Mather, where for 24 years she built brands for clients such as American Express, Pepperidge Farm, and Unilever. She also spent three years as chief marketing officer for Girl Scouts of the USA before accepting the WNBA position.

Richie’s professional achievements and commitment to the advancement of girls and women has earned numerous honors, including the YMCA Black Achiever’s Award and Ebony magazine’s Outstanding Women in Marketing and Communications Award.