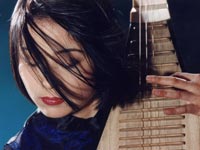 Wu Man, a musical ambassador for the pipa, one of China’s most popular instruments for the past two millennia, and an advocate for the music of China’s rural ethnic minorities, brings her music and her message to Dartmouth for a week-long residency. (photo by Liu Junqi)

Wu Man, a Grammy-nominated musician who has bridged East and West, ancient and modern, and China’s glittering urban centers and its poor but musically rich rural outposts, comes to Dartmouth for a week-long residency that includes a performance on Friday, January 27, at 8 p.m. in the Hopkins Center’s Spaulding Auditorium.

“She, more than anyone, is responsible for the globalization of the pipa,” said ethnomusicologist Ted Levin, Dartmouth’s Arthur R. Virgin Professor of Music Professor of Music.” She arguably has done that better than anyone else in the world—by stimulating a new repertoire for the instrument, not only in China but also in the West, because of her extraordinary virtuosity and musicianship.” Levin first came to know Wu Man 20 years ago when she had only recently arrived in the West as a prodigy on a then little-understood classical Chinese instrument. Later, they became colleagues in the Silk Road Ensemble, which Wu Man joined in 1993 and for which Levin stills serves as a board member.