Dorothy and Robert King ’57 have partnered with Dartmouth to help address the problem of global poverty by establishing a scholarship program for exceptional students from developing nations. 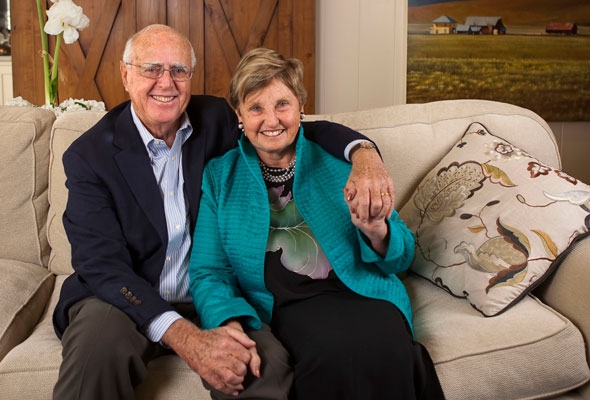 Robert King ’57 and Dorothy King have made a $14.7 million gift to the College to support the education of students from developing nations. (photo courtesy of Robert and Dorothy King)

They have made a gift of $14.7 million that will fund a total of 12 King Scholars each year. The scholars will be encouraged to use their Dartmouth educations to return to their home countries after graduation to work toward the alleviation of extreme poverty. The gift also establishes an admissions recruitment fund to identify and bring eligible students to Dartmouth from developing countries in Africa, Latin America, and Southeast Asia.

“With this gift, the Kings are investing in the fundamental connection between education and the ability of people and nations to take control of their own futures,” says Dartmouth President Jim Yong Kim. “The King Leadership Scholars will be selected not just for their inherent drive and talent, but for their commitment to improving the economies, health, and well-being of their home countries. Dartmouth’s mission is to prepare graduates who will make a positive difference in the world, and I'm confident the King Scholars will embody that mission.”

The Kings’ gift to Dartmouth is the most recent of a series of extraordinary philanthropic partnerships launched by Bob and Dottie King to address the problem of extreme poverty at home and around the world.

“I’ll say up front that our faith informs our philanthropy,” says Bob, founder of Peninsula Capital Fund, a venture capital firm based in Menlo Park, Calif. “When almost a billion people are living on $1.25 a day or less, we feel called to help others help themselves.”

Dartmouth in the world

Dartmouth has a strong international focus. Seven percent of Dartmouth undergraduates come from outside the United States. Distinguished alumni from developing countries include Kul Gautam ’72 (Nepal), former assistant secretary-general of the United Nations and deputy executive director of UNICEF, who spoke at Dartmouth’s Convocation this past September. Dartmouth students also study around the world: more than 60 percent of undergraduates participate in 48 foreign-study programs in 23 countries, and Dartmouth ranks eighth among all U.S. doctorate-granting institutions for participation in full term study abroad programs.

Even a small investment, Bob says, can make a life-changing difference to an individual struggling to rise out of poverty. A few years ago, when he was visiting with small entrepreneurs in Kenya as a board member of Village Enterprise, an organization that provides micro-loans to help people in rural communities build sustainable businesses, Bob met a fish seller who had done just that.

“She was describing her business of smoking fish—a value-added product,” he recalls. “I started hammering her with questions about profit margins, unit sales, and she answered every one. Eighteen months before, this same woman was begging on the street, and now she can afford to send her kids to school. It really hit me: here was a transformed life, somebody who was obviously really smart and was given a chance.”

To give chances, to transform lives: this is the impetus behind almost all of the Kings’ philanthropy. In addition to their work with Village Enterprise, the Kings have established the Thrive Foundation for Youth, focused on the developmental needs of children aged 10 to 15; supported Manasseh’s Children, a nonprofit assisting orphans and street children in the United States and abroad; and in 2011 made a $150 million gift to launch the Stanford Institute for Innovation in Developing Economies at Stanford Graduate School of Business, where Bob earned his MBA in 1960—a gift that has added their names to Forbes and Business Insider’s lists of the “Most Generous People in America” (at number eight, in both). The Institute’s mission: to alleviate poverty in the developing world through the dissemination of research and innovation, focused on entrepreneurship and based on the belief that a critical route for economic growth is through the creation of new entrepreneurial ventures and by scaling existing enterprises.

“As a student at Dartmouth, Bob King not only heard President Dickey’s famous words, ‘There is nothing wrong with the world that better human beings cannot fix,’ but took them to heart,” says President Kim. “What’s remarkable about the Kings’ gift to the College—and their whole body of philanthropic works—is their ability to leverage the infrastructure and reach of an institution like Dartmouth to have an impact on the world greater than any one individual could make alone.”

Or, as Dottie puts it, “We really believe in good people.”

The Kings’ interest in supporting international students grew out of Dottie’s childhood experience of hosting a Chinese exchange student in her family’s home in Madison, Wis. She and Bob have continued the tradition in their home, serving as a host family for foreign graduate students at Stanford. They have formed close relationships with the more than 35 students whom they’ve welcomed into their home, and still receive phone calls and letters from around the world, some from students they hosted more than two decades ago.

“It’s been a great way to bring the world to our children,” says Dottie, who majored in child development at the University of Wisconsin. “And you know, it’s a hard thing to live in another country. We wanted to create a home for people from far away.”

One such student, Andreata Mufuro, from a “dirt poor family in Zimbabwe,” stayed with the Kings while earning her MBA at Stanford, and has hosted them, in turn, in Tunisia, where she worked for The African Development Bank, and in Kenya, where the Kings were in her wedding. Another former student, from Paris, drove Dottie and the kids around France for three weeks and flew to London to meet Bob. Still another, Xiangmin Cui, from China, introduced King to Eric Xu, founder of Internet giant Baidu. As a result of that meeting, Bob’s company, Peninsula Capital Fund, provided early seed money to the Chinese Internet search company, which held its IPO in 2005.

Now the Kings want to share their good fortune on a larger scale. At Dartmouth, the King Leadership Scholar Program will annually fund three scholars in each class, for a total of 12 scholars each year, recruited from impoverished communities in Africa, Latin America, and Southeast Asia. The King Scholars will receive pre-orientation support and mentoring services to help with the transition to college, as well as ongoing academic mentoring throughout their Dartmouth careers. During one summer term of their time at Dartmouth, the King Scholars will return home to research and write about solving problems of extreme poverty in their communities, and be encouraged to continue this work post-graduation.

Perhaps most critically, an alumni network, facilitated by the College, will connect all current and past King Scholars with each other to create a community of people who will learn from each other as they tackle the challenges of their home countries. The Kings' assumption is that the people best positioned to fix extreme poverty are those who come from it—if they have the education and resources to put their ideas into action.

“The Kings’ gift will allow Dartmouth to recruit exceptional students from places in the world where the College is not well known, and to make sure the most promising students can afford to come to Hanover,” says Maria Laskaris ’84, dean of admissions and financial aid. Beginning with the Class of 2012, Dartmouth began admitting qualified international students "need blind," promising to meet their full financial need after they matriculate.

Bob, who as the son of a municipal bond salesman from Melrose, Mass., was “determined to graduate from Dartmouth without any debt”—and worked multiple jobs to do so—echoes Dickey’s words. “There are very few issues in this world that cannot be solved. We don’t have a magic wand or easy answers, but it is worth giving our best effort. And Dartmouth, as an institution, will be able to do what we, as individuals, cannot.”

Dottie hopes the program will affect all Dartmouth students, not just those receiving the scholarship. “We want every student enrolled at Dartmouth to know that they’re going to a school that cares about the world—that it’s just built into the culture.”

Bob adds, “We feel grateful for the good fortune we’ve had in our lives. We’re not interested in naming buildings. We’re interested in people who can make a difference. And we get really excited about what Dartmouth can represent in the world.”

“And we don’t need another yacht,” says Dottie.

Bob laughs. “We don’t even have the first one,” he says.