Galaxies’ Glory Days Are Past but They Sparkle Still

As a Yale undergraduate, Ryan Hickox studied particle physics and played rugby—two exploits that set him on the path that eventually led to Dartmouth and his discoveries about starburst galaxies in the early universe, as recently published in the Monthly Notices of the Royal Astronomical Society. 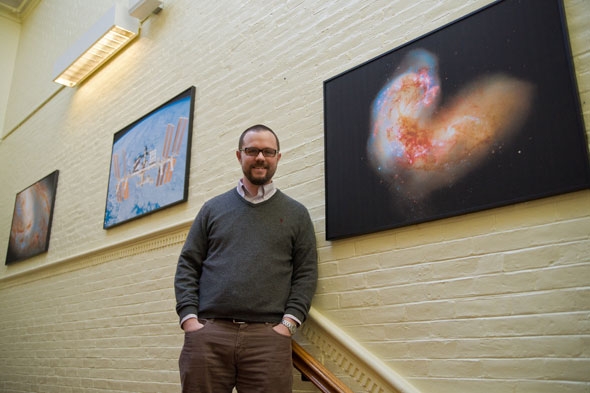 Astronomer Ryan Hickox stands by an image of the Antennae Galaxies, the nearest and youngest examples of a pair of colliding galaxies. (photo by Eli Burak ’00)

“I enjoyed the process of doing research, but not necessarily in particle physics,” recalls Hickox, an assistant professor in the Department of Physics and Astronomy. As a senior at Yale, he discovered astronomy but was still undecided about his future. Taking a job in England, he taught high school physics and astronomy while coaching the school’s rugby team. A passion for teaching was awakened along with a fondness for Britain.

Astronomy took him to Harvard for a PhD, the U.K. experience beckoned a return for postdoctoral studies at Durham University, and Dartmouth’s emphasis on teaching ultimately drew him to Hanover.

“What attracted me to Dartmouth probably more than anything else was the fact that they care a lot about teaching here, but still have really good access to resources for research along with a full PhD program,” says Hickox. “That’s actually a unique combination.”

At Harvard and then at Durham, Hickox focused on black holes, among the most mysterious objects in the universe, and the highly luminous quasars that are powered by them. Black holes—supermassive black holes, actually—are found at the centers of galaxies, including our own Milky Way.

Hickox was trying to understand the connection between these central black holes and their galaxies. In this quest, Hickox and his Durham colleagues developed a set of powerful analytic techniques to measure the distances between quasars, in order to gauge the distribution of galaxies in the universe today. Nearby, large elliptical galaxies show a clear pattern of being clustered with respect to each other.

“We basically know that the big structures in the universe stay stuck where they are in space. So if you find a population of objects in the early universe that is clustered the same way in space as those today, you can say with pretty good certainty that those objects are the same things,” Hickox observes. 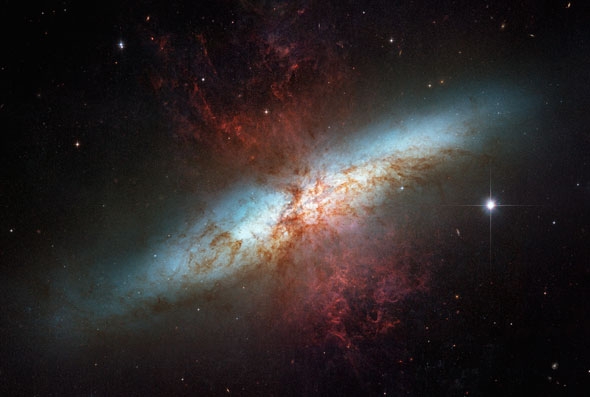 Plumes of glowing hydrogen blast from the central nucleus of starburst galaxy M82. The pale, star-like objects are clusters of tens to hundreds of thousands of stars. (photo courtesy of NASA, ESA, and The Hubble Heritage Team - STScI/AURA)

With the advent of new instruments, including the Atacama Pathfinder Experiment telescope in Chile, the Spitzer Space Telescope, and the Keck Observatory in Hawaii, the astronomers could peer into the early universe, looking back 10 billion years.

Hickox and his colleagues applied their powerful clustering measurements to these ancient galaxies, “for the first time showing a clear link between the most energetic starbursting galaxies in the early universe, and the most massive galaxies in the present day.”

Stars form when clouds of molecular gas in the galaxies become sufficiently dense and cold for the gas to coalesce and collapse under gravity into a star. “We think if you can build up a large reservoir of this molecular gas in a galaxy, it will naturally start collapsing and forming into stars,” Hickox says.

At one time, the starburst galaxies were making stars at a rate 1,000 times greater than today. This intense frenzy of star formation stopped abruptly after only 100 million years, a mere tick of the cosmological clock. Hickox relates this to the formation of galactic black holes.

“We don’t understand exactly how the black holes form in the early universe but we think that once galaxies get big enough they almost always have a black hole in the center,” he says.

Hickox concludes that, “whatever the process is that puts the gas into the galaxy to form the stars, it is also sending material down onto the black hole. It takes a little while but once the black hole grows and gets big enough, it will get powerful enough that it can then blow away the gas and shut off both star formation and its own quasar activity.”

As a result, the galaxies of aging stars in the universe today are relatively peaceful, starbursts no longer, and their central black holes seem far less hungry. But while cosmic activity may have slowed down, Hickox’s pace and drive for discovery have not.