A History of the Great Books from a Great Writer 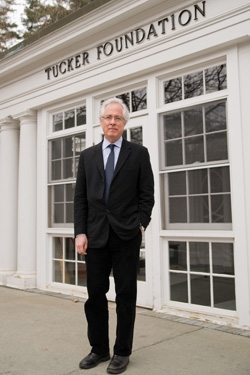 Pulitizer Prize-winning author and Harvard Professor Louis Menand explained the history of great books courses as he delivered the annual William Jewett Tucker lecture, “Are the Great Books the Moral Heart of Liberal Education?” on February 16, 2012.

“You’re a nice audience and I won’t keep you in suspense,” Menand began, quickly answering the question and topic of his talk with: “The answer is no.”

“A hundred years ago, an effort was made to bring humanities into the university via the great books and this effort failed. The humanists had to make their way in a different manner. They had to make their way by defining their subject matter as a legitimate field of inquiry, and they did so,” Menand said.

His lecture was part of the “Leading Voices in Higher Education” strategic planning speaker series which is bringing influential scholars and writers to Dartmouth as part of the College’s currently underway process to imagine its next 250 years. The next speaker, on February 27, is cultural historian Robert Darnton.

The annual Tucker lecture seeks to address the moral and spiritual life of Dartmouth students in support of the mission of the Tucker Foundation, which was named for Dartmouth’s ninth president William Jewett Tucker, who served from 1893 to 1909.

In an interview before the lecture, Menand told Dartmouth Now that understanding the history of American higher education is useful as a tool when considering change, as Dartmouth currently is through strategic planning. He also said colleges would do well to help students understand how what they’re learning has real-world application, something Menand said academics don’t always consider.

“The liberal arts and sciences colleges are devoted to an ideal of knowledge for its own sake, that’s part of how we’ve been trained. We are very resistant to making our curricula seem preparation for professional or vocational kinds of training, even though most of the students in our classes are not going to go on to be professors or scholars,” said Menand, noting that the liberal arts has declined in its proportional share of higher education every year since 1970.

“You want to get students excited about the real world impact of the research professors do. That can change the dynamic for your undergraduate culture. You can get them motivated by telling them that actually the stuff you’re learning is changing the world, and you can change the world too if you learn it,” he continued. 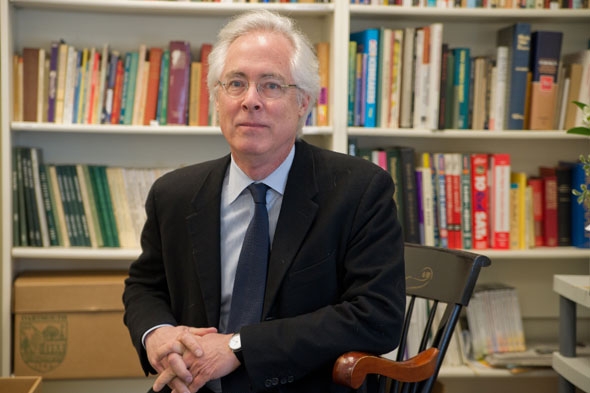 Louis Menand spoke in an interview before delivering the William Jewett Tucker lecture on February 16, 2012. (photo by Eli Burak ’00)

Known for his Pulitzer Prize-winning book The Metaphysical Club, an intellectual and cultural history of late 19th- and early 20th-century America, Menand has written for The New Yorker since 1991. A professor of English and American literature and language at Harvard, he has also taught at Princeton, Columbia, City University of New York, and the University of Virginia School of Law.

Menand has ties to the Dartmouth community through his late father, Louis Menand III, a popular MIT teacher and political scientist, who taught government at Dartmouth early in his career. The Menand family has for 50 years had a home in the Hanover village of Etna.

Menand said his next big writing project focuses on America in the Cold War period, after 1945. He said he’s also working on a New Yorker piece about Mitt Romney.

The writer closed his standing-room-only lecture telling the rapt audience: “My job is to teach, to understand from the evidence in the historical record what people think and what they have thought. That’s interesting, it’s fun to figure out, and it’s useful. What makes it useful is figuring out why people thought the way they did. For this just might give us a handle on a question we should always be asking ourselves no matter what we do, which is why we think the way we do. Our thoughts have a history and knowing that history gives us some of the power we need to change the way things are.”