Listen to a February 2011 podcast in which Ted Levin reflects on his three decades of music research and shares an excerpt from “Getme, Getme” from the “Music of Central Asia, Volume 8: Rainbow featuring the Kronos Quartet with Alim and Fargana Qasimov and Homayun Sakhi” 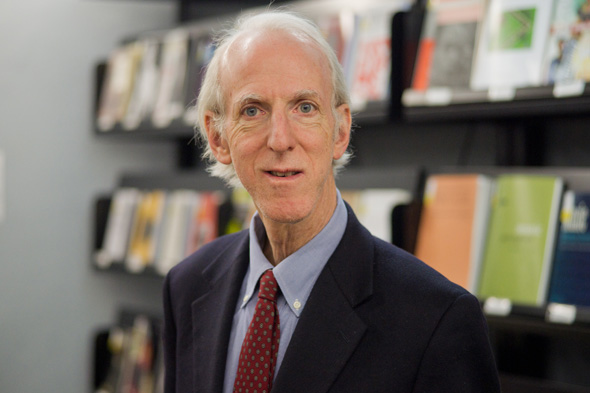 Levin says he will address the topic of “how, why, and to whom music matters in an age of cultural globalization dominated by the ubiquitous impact of digital technology and commerce. I’ll use examples drawn from musical traditions that I’ve personally studied, and I’ll profile a number of musicians whom I’ve brought to Dartmouth over the two decades that I’ve been on the faculty.”

Levin will also present three distinguished raga performers in a March 1 concert at Dartmouth’s Collis Student Center. Homayun Sakhi is the world’s greatest living performer on the Afghan rubab, a lute with 12 strings, and American Ken Zuckerman is a virtuoso improviser on the closely related sarod. They will be joined by Afghan-American tabla player Salar Nader, one of the young international stars of Indian percussion.

“These musicians have never performed together, but raga is a bit like jazz: you improvise on a basic musical structure,” says Levin. “The more accomplished the musicians, the hotter the improvisation, and Sakhi, Zuckerman, and Nader are all spectacular players.”

Levin recently completed Music of Central Asia, an ambitious 10-volume CD-DVD project co-produced by the Aga Khan Music Initiative and the Smithsonian Institution Center for Folklife and Cultural Heritage. The CD-DVD series represents the fruits of more than three decades of research that has taken Levin to Kyrgyzstan, Kazakhstan, Tajikistan, Uzbekistan, and China to document and preserve Central Asia’s rich musical heritage. 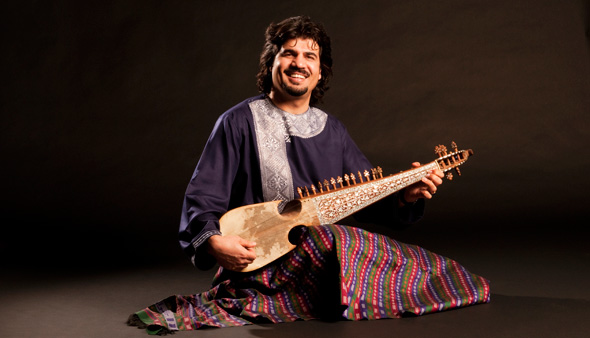 Homayun Sakhi, the world’s greatest performer on the Afghan rubab, will perform raga music with two other musicians on March 1. (photo by Jay Blakesberg)

Borderlands, the final installment in the series, was recorded by Levin in Beijing in 2010 and will be officially released on May 29. It features a collaboration between the American-based pipa virtuoso Wu Man (who spent a week in residency at Dartmouth last month) and Uyghur musicians from the Xinjiang Uyghur Autonomous Region in western China. Earlier this month, Levin premiered the album for students in his “Global Sounds” course (he’s also teaching “Ethnomusicology” this term).

Levin was the first executive director of the Silk Road Project, founded by cellist Yo-Yo Ma, and is the author of several books. These include The Hundred Thousand Fools of God: Musical Travels in Central Asia (and Queens, New York) and Where Rivers and Mountains Sing: Sound, Music and Nomadism in Tuva and Beyond, which will soon be published in a Russian translation.

He also wrote and edited a textbook called Music in Central Asia: An Introduction, which serves as a companion volume to the CD-DVD series. It is designed to help students in Central Asia learn about their own musical heritage, and is being co-published by the Aga Khan Music Initiative and the University of Central Asia. Levin is currently working on a book about culture and development in Central Asia, for which he’ll be relocating to Kyrgyzstan for spring term to conduct field research.

The Presidential Lecture Series was established in 1987 by then-President James O. Freedman, and honors the contributions of outstanding members of the Dartmouth faculty. Levin’s lecture is free and open to the public and will be followed by a reception in Rauner Library at 6 p.m.

The March 1 concert featuring raga musicians Sakhi, Zuckerman, and Nader is at 8 p.m. in the Collis Center and is free and open to the public. It is sponsored by the Department of Music, the Dickey Center for International Understanding, the Leslie Center for the Humanities, the Asian and Middle Eastern Studies Program, and Collis Center.