Rocket Reaches into the Northern Lights to Illuminate Aurora Activity 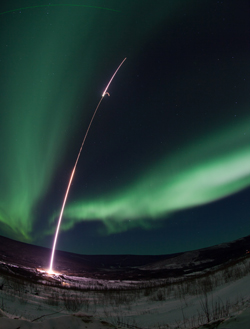 A research rocket is launched on February 18 high into the sky over Alaska, into the Aurora Borealis. Professor Kristina Lynch and others are collecting data on the nature of the aurora in relation to the planet’s environment. (photo by NASA Photographer Terry E. Zaperach)

Kristina Lynch is entranced by the northern lights. The Aurora Borealis, as the phenomenon of the shimmering lights is more properly known, brought her 30 miles north of Fairbanks, Alaska, to the Poker Flat Research Range.

Lynch, an associate professor of physics and astronomy at Dartmouth, studies the electricity and magnetism of the aurora. She uses the auroral zones of the Earth as her laboratory.

On the Saturday evening of February 18, Lynch and her colleagues launched a 46-foot NASA rocket arcing 217 miles above the Earth to collect space physics data straight from the heart of the aurora. It sent a stream of real-time data back to the researchers before landing 200 miles downrange.

“The charged particles that come from the sun interact with the Earth’s magnetic field and produce the northern lights,” Lynch explains. “Beyond the beautiful display, they also teach us about plasma physics and planetary environments. What we learn may also have implications regarding the aurora’s effects on the Global Positioning System (GPS), a subject of study for our Cornell colleagues.”

Scientifically, the mission is focused on the structure and dynamics of auroral displays: why and how the finely-structured dancing lights move. It is part of a NASA-funded collaborative research project that also involves 60 scientists and engineers from several institutions, including Cornell, the University of New Hampshire, the University of Alaska Geophysical Institute, and the NASA-Wallops Flight Facility. 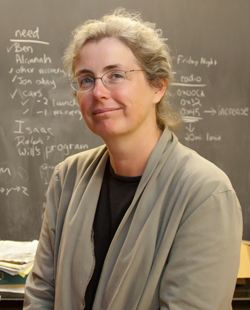 Instruments on board sampled electrons and ions, in the region just above the neutral atmosphere, that are affected by a form of electromagnetic energy called Alfven waves. These waves are a key driver of the structured and dynamic shimmering lights visible in high latitudes.

The rocket payload separated into two parts once launched. One extended antennae to measure electric fields generated by the aurora. Other antennae and sensors measured electrons and ions interacting with Earth’s magnetic field. In addition to tried-and-true instrumentation, the payload carried several new technology development instruments. These include Dartmouth-designed low-resource particle detectors that can fit on very small spacecraft, and updated GPS receivers being designed by Cornell engineers in the Global Positioning System Laboratory of the late Professor Paul M. Kintner, Jr., a colleague and mentor of several Dartmouth faculty.

“We hope that knowledge gained through our exploration of the Aurora Borealis will contribute to both our understanding and appreciation of the natural world, and the interactions of nature with technologies such as GPS,” Lynch remarks.

Other Dartmouth people involved in the project this winter include graduate student Phil Fernandes and staff design engineers David Collins and Kevin Rhoads. Graduate student Lisa Gayetsky and recent graduate Phil Bracikowski ’08 are among those who worked to develop the particle instrumentation. All the Dartmouth instrumentation was built by students and staff at the Department of Physics and Astronomy, with the detailed mechanical parts machined in the Science Division Apparatus Shop.