About 540 students—nearly 200 more than last year—set a new record and demonstrated their spirit by jumping into the icy waters of Occom Pond for Winter Carnival 2012. In addition to the 18th annual Polar Bear Swim, students also built a giant snow-sculpture cupcake on the Green, cheered on athletic teams, and danced at the Carnival Ball.

The hole in the Occom Pond ice was widened to accommodate two at a time for this year’s Polar Bear Swim. Temperatures in the 40s drew more than 500 eager swimmers. (photo by Michael Sugimura ’14)

Although the near-total lack of snow caused the cancellation of events such as the Carni Classic and Human Dogsled Race, Winter Carnival Committee Chair Mandy Bower ’14 credits the mild temperatures for helping draw so many students to the Polar Bear Swim. To accommodate the hundreds of people waiting in line, the opening in the ice was widened to allow two swimmers to take the plunge simultaneously. 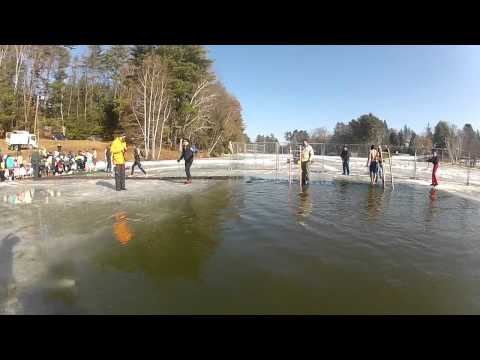 Sam Stratton ’15 of Winchester, Mass., wore a video camera into the water for his 10 a.m. dip. “It was an exciting thing to do and a good way to start the day,” says Stratton. (See footage from Stratton and others above.)

“I’m constantly amazed at the resourcefulness of students, and they showed that with their ability to pull off a Winter Carnival with no snow,” comments Eric Ramsey, who advised the student leaders of Carnival. Ramsey is director of the Collis Center for Student Involvement.

In keeping with tradition, Carnival weekend included many home Division I athletic contests. The ski team came in second place out of ten teams in competition held at the Dartmouth Skiway and in Stowe, Vt. Eric Parker ’12 of Anchorage, Alaska, won the 20-kilometer cross-country race with a time of 59:17.4.