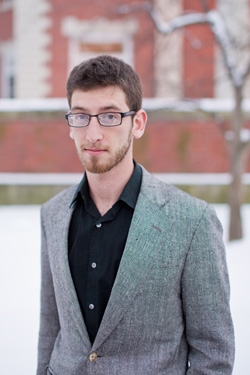 Nathan Gusdorf ’12, one of Occupy Dartmouth’s founders, believes the movement has pushed himself and other students to think critically. (photo by Eli Burak ’00)

Nathan Gusdorf ’12 is from St. Louis, Missouri. A philosophy major and Jewish studies minor, he is writing a thesis on the German philosopher Theodor Adorno. Gusdorf was one of four students who started Occupy Dartmouth on October 13, 2011, and was interviewed by the New York Times in a story about the movement and corporate recruiting.

“The great thing about Occupy,” he says,“is that occupying is great. It’s liberating and engaging and joyful, I think, for all of us who were part of Occupy. Someone once asked the writer Grace Paley why she spent so much time participating in political struggle when the achievements are so often reversed. She answered, ‘Because it’s a good way to spend a life.’”

Gusdorf lived in the Occupy Dartmouth tent in front of Collis Center for two months during fall term. The group dismantled its encampment on January 7 and remains active.

As the campus and community are no doubt aware, Occupy Dartmouth folded up its tent on the corner of Main and Wheelock early last month. This does not mean that our movement has ended. We continue to occupy elsewhere on campus, and even off campus. We continue to change the spaces in which we interact with each other. We make them more free, more open, and more equal.

We at Occupy often talk about how politics is more than policy. Politics is thinking and arguing together about what we ought to do as a society. It’s about identifying and opposing the forces of oppression that keep so many voiceless and downtrodden. This means that we must consider how extreme economic inequality in America inhibits a free and flourishing democratic society. The political conversation often does not include the voices of those who lack sufficient employment, health care, education, and housing.

This is more than raising awareness. Occupy is about cultivating a critical consciousness: provoking people to assume their responsibility as citizens to call out what is wrong with the world and to see how they participate in it. We have to become aware of what we think in the first place. Then we have to find a way to question those beliefs, on the basis of our own critical intuitions as well as in dialogue with others.

Critical reflection tends to threaten the status quo. At Dartmouth, many privilege technical expertise and measurable progress and devalue the reflective and critical capacities of the intellect. Students flock to the applied social sciences: economics, public policy, international relations, psychology. Countless hours are spent in preparation for corporate interviews.

I have nothing against the pursuit of practical knowledge, but when we mistake technical expertise for intellectual understanding, we devalue our ability to think. Political struggle, by contrast, requires that we embrace our intellectual abilities to the fullest extent. It is through reflective judgment and critical insight that we can resist blindly replicating the system.

What do I mean by replicating the system? Learning certain frameworks for evaluating data and producing results without ever reflecting on their foundations in order to question and criticize. Accepting that economic liberalization produces growth and happiness. Accepting that prisons and schools punish and reward people as they deserve. Accepting that the drugs we are prescribed make us healthier. Accepting that the school can do anything for its students, as long as they go through the correct channels and fill out the right forms. Accepting that if we alienate people with controversial statements, we will never succeed.

These dogmas risk turning intellectual labor into a mere commodity: a thought that does not produce measurable results should not have been thought at all, and by contrast, profitable thinking is good thinking. Countless students have said to us, “Well, you ought to work to join the 1% so that you can really change things.” In other words: “Resistance is a waste of time. Just follow the rules, and all you the change you need can come from within the institutions you oppose.”

Since Occupy Dartmouth began on October 13, I believe that we’ve made more of a difference within Dartmouth than I ever anticipated. I’ve been part of a large group of students who have grown to think more critically and politically.

I’ve become more aware of politics in an every day sense, more aware of my own ways of thinking and participating socially, and more aware of how we all understand or misunderstand each other, than in my first three years at Dartmouth. One of the most rewarding and inspiring developments, so far, has been organizing political action with members of the Upper Valley community.

So we don’t live in our tent anymore. What do we want? When do we declare victory? For me, victory is when Occupy is no longer anomalous. When spaces finally exist where people’s material needs are provided for, where they can interact with each other as equals to think about how we can take responsibility for the world we inhabit together.